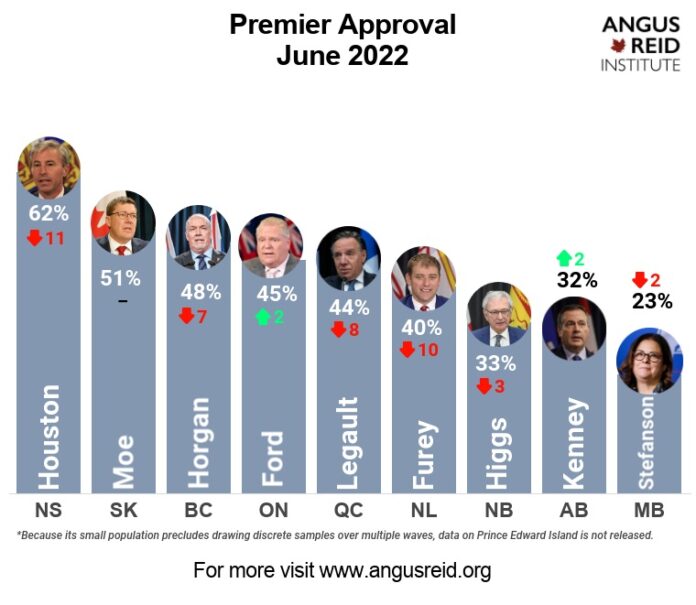 WHILE some of Canada’s premiers approach the summer in a decidedly more “chill” place with their respective electorates, others are feeling the burn, according to Angus Reid Institute.

The latest data from the non-profit Angus Reid Institute shows Nova Scotia’s Tim Houston holding the distinction of being Canada’s most approved-of premier, while simultaneously seeing goodwill towards him decline the most over the last three months. Last quarter, Houston’s approval stood at 73 per cent. It’s since dropped 11 points, to 62 per cent.

Movement has trended downward for most of the rest of the premier pack, with notable drops for B.C.’s John Horgan and Quebec’s François Legault (seven and eight points respectively).

Two premiers see statistically insignificant increases in approval. If Doug Ford was hoping for a renewed honeymoon with Ontarians on the heels of a majority re-election, he’ll have to settle instead for a two-point bump. And outgoing Premier Jason Kenney is also given a two-point increase in approval by Albertans on his way out the door after a fractious political civil war within the ranks of the governing UCP saw him put to a leadership review that failed to provide enough of an endorsement to convince Kenney to carry on. 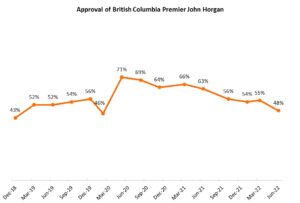 HORGAN’S approval continues a downward trend. Just under half of British Columbians approve of Horgan, the lowest approval measured for the BC NDP leader since before the onset of the pandemic in 2020.

In addition to a growing debacle surrounding the near $1-billion plan to demolish and rebuild the Royal B.C. Museum, Horgan’s government was forced to defend a lack of funding for new school construction, a shortage of family doctors and overall being “out of touch” with regular British Columbians by opposition parties. The problems – and more – keep piling up at the door of the premier’s office.