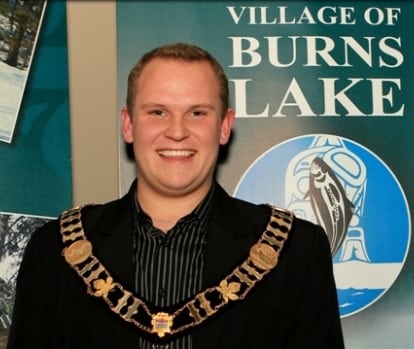 THE BC Prosecution Service (BCPS) announced on Wednesday that Leonard Doust has been appointed Special Prosecutor in relation to an investigation which resulted in charges being laid against the former mayor of Burns Lake, Luke Strimbold (see photo).

The BCPS said: “On February 3, 2018, the accused was arrested by the Burns Lake RCMP and charged with a number of sex-related offences.  The accused is the former mayor of Burns Lake and has served on a number of committees with the BC Liberal party. He was released on conditions and is scheduled to appear next on April 6, 2018, in Burns Lake Provincial Court on information # 9330-1. A Report to Crown Counsel (RCC) has been forwarded to Crown for charge assessment.

“On March 6, 2018, the Assistant Deputy Attorney General Peter Juk QC (ADAG) appointed Mr. Doust Special Prosecutor under s. 7 of the Crown Counsel Act because he considered it in the public interest to do so. The appointment of a Special Prosecutor is intended to avoid any potential for real or perceived improper influence in the administration of justice in light of the nature of the allegations and the identity of the accused as a former elected municipal official with significant connections to the BC Liberal party.”

Doust is a senior Vancouver lawyer in private practice. His mandate includes:

* Conducting an independent assessment of the current charges based on the RCC submitted by the investigative agency, and making the charging decision he deems appropriate in the exercise of his independent discretion.

* Providing a written report to the ADAG, with the results of his assessment and the reasons for his decision; and,

* Conducting the prosecution and any subsequent appeal if he determines in the exercise of his discretion that a prosecution is warranted.

CBC had reported that Strimbold is charged with 24 sex-related crimes, including sexual assault, against four people between October 2015 and November 2017. Three of them were under the age of 16 at the time the incidents are alleged to have taken place, according to court documents.

Strimbold is also charged with sexual interference, sexual exploitation and invitation to sexual touching, the majority of which are related to people under the age of 16.