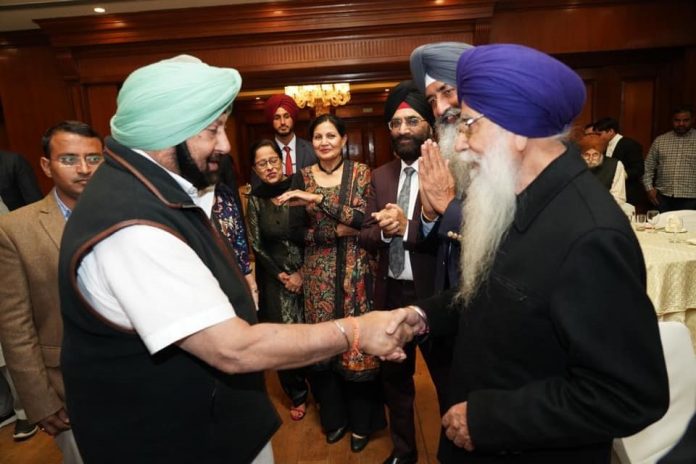 Chandigarh (IANS): Punjab Chief Minister Amarinder Singh has assured the Punjabi diaspora settled abroad that he would take up with the Chief Justice of the High Court and the Central government, the issue of setting up special courts to expeditiously settle cases of those who had been declared proclaimed offenders after fleeing Punjab during terrorism.

He was responding to a request from a group of Non-Resident Indians (NRIs) who came for the 550th birth anniversary celebrations of Guru Nanak Dev in Jalandhar city on Monday.

The Chief Minister presented the NRIs with books on the life and philosophy of Guru Nanak Dev, a commemorative coin and a memento.

The NRIs expressed concern that many of those who had immigrated abroad were unable to visit Punjab and pay their respects at the Darbar Sahib and other holy places as they had been declared proclaimed offenders on account of their inability to appear before the courts in certain cases.

The Chief Minister said he would discuss with the Chief Justice of the Punjab and Haryana High Court the possibility of setting up a special court to resolve such cases expeditiously.

He said he would take up with the government of India the possibility of setting up such courts in a few Indian Missions abroad, such as Britain, the US, Canada, Germany and France, where a large Punjabi population resides.

The Chief Minister urged the Punjabi diaspora to join his government’s efforts to lead the state to a new era of development, with the aim of securing the future generations and enabling their progress.

He appreciated them for making Punjab and India proud with their work in different parts of the world.

MARINE Drive Station is closed to Canada Line customers due to a medical emergency. Inbound Canada Line trains will only be able...
Read more