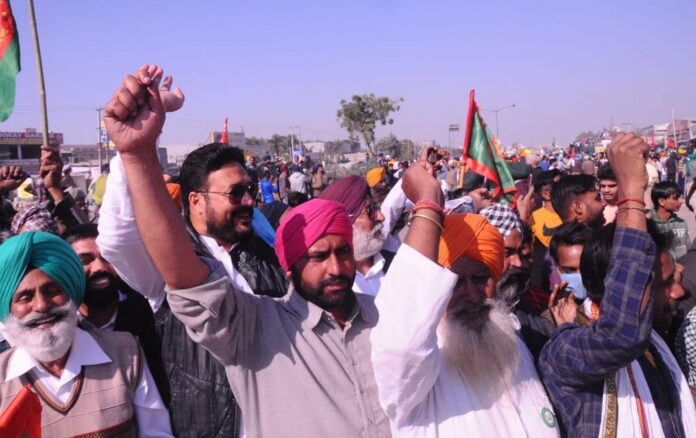 Chandigarh (IANS): The planned protest against new farm laws and the ‘brutality’ of the security forces by lobbing teargas shells and using water cannons to stop the peaceful march of the farmers towards the national capital has left the diaspora largely from Canada worried and shocked.

They asked the Indian government to engage in an open dialogue with the farmers as their livelihoods are going to be impacted.

Sajjan tweeted: “The reports of peaceful protesters being brutalized in India are very troubling. Many of my constituents have family there and are worried about the safety of their loved ones. Healthy democracies allow peaceful protest. I urge those involved to uphold this fundamental right.”

Joining the issue, Sonia Sidhu, MP for Brampton South, Canada, tweeted, “I received many messages from constituents concerned in Brampton South about the situation in India.

“My residents told me how worried they are about the protests of the Punjab farmers. I share their concerns and hope that the situation will be resolved peacefully.”

Joining her counterpart, Ruby Sahota, MP for Brampton (North), said the determination and resilience of the farmers is admirable.

“In a free and just society one should be able to advocate for their cause without the threat of force being used against them. The brutality being faced by the Indian farmers in these images is deplorable,” she said in a tweet.

Joining the cause, Chandigarh-born Rachna Singh, Parliament Secretary of British Columbia, said she was really saddened by the way Punjab farmers are being treated. “This is unacceptable.”

Describing the violence perpetrated by the Indian government against farmers peacefully protesting is appalling, Canada’s New Democratic Party leader Jagmeet Singh tweeted: “I stand in solidarity with the farmers from Punjab and across India — and, I call on the Indian government to engage in peaceful dialogue rather than violence”

He thanked Jack Harris, MP for St. John’s East, for his advocacy.

“Peaceful protests are fundamental in any democracy, and I urge for the rights of the protestors to be respected,” said Navdeep Bains, MP for Mississauga-Malton.

“Farmers are peacefully protesting over controversial bills that will impact their livelihoods. Water cannons and tear gas, are being used to silence them.”

Tracing his roots to a farmer family, Indo-Canadian politician Gurratan Singh said the images of police brutality were horrific.

“I come from a family of farmers. I feel the pain and struggle of farmers protesting laws that threaten their livelihoods. The state continues to meet peaceful protestors with violence and brutality,” he tweeted along with the video of his speech made by him in the Ontario Assembly.

“Farmers are the backbone of our society. They feed cities, and right now they are under attack in India. Folks in my riding are concerned about new laws that are passed by the Indian government that are going to hurt the farmers in Punjab, Haryana and others across India.

“That’s why I am asking all the members of this House to come together to stand with farmers against these unjust laws passed by the Indian government, so farmers in India can live with respect and dignity that they deserve,” Gurratan Singh said in his speech.

Standing with farmers in India, Leader of the Ontario New Democratic Party, Andrea Horwath, said: “Everyone deserves to be able to exercise their democratic rights without fear of state-sanctioned violence”.

Canadian MP Tim Uppal posted, “India’s farmers deserve to be heard and respected. This is horrific.”

The farmers are protesting against the farm laws as they feel that these laws would pave the way for the dismantling of the minimum support price (MSP) system, leaving them at the mercy of big corporate entities.

Harmandeep Tiwana, 28, of Calgary among 3 charged in $3-million seizure of drugs and cash

No kidding! Mounties always get their … er … goat!

CBSA officers seize over 17,000 litres of substance used to produce...

Harmandeep Tiwana, 28, of Calgary among 3 charged in $3-million seizure...