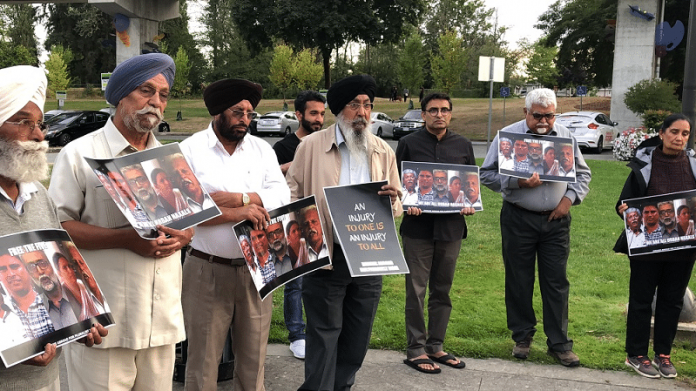 MEMBERS of Indians Abroad for Pluralist India (IAPI) on Friday held a rally against the recent arrests of five political activists in India at Holland Park in Surrey. Representatives of various progressive groups participated in the demonstration.

IAPI believes that they have been framed to suppress the voice of dissent as they have always stood for the oppressed and marginalized.

The participants raised slogans against draconian laws and state repression in the world’s largest democracy and held placards carrying the pictures of those arrested to show their solidarity with them. Among those in attendance were seniors, women and youngsters.

Progressive poets and activists like Amrit Diwana and Sarabjit Baaz recited rebellious poems on the occasion. Renowned story writer Harpreet Sekha was also in attendance to show his support. Those who spoke at the event included IAPI co-founders Parshottam Dosanjh, Rakesh Kumar and Gurpreet Singh. A veteran community activist Chin Banerjee spoke at length to explain what is going on in India under the right-wing Modi government.

Describing dissent as a safety valve, the Supreme Court on Wednesday directed that the five human rights activists arrested by Pune Police should be kept under house arrest until the next date of hearing on September 6.

Taking a dim view of the crackdown, Justice Chandrachud said: “Dissent is a safety valve of democracy. If it is not allowed, the pressure cooker will burst.”

Those arrested on Tuesday included Varavara Rao in Hyderabad, Gautam Navlakha in Delhi, Sudha Bharadwaj in Haryana and Arun Ferreira and Vernon Gonzalves in Maharashtra.

Chandrachud noted that the arrests had taken place nine months after the activists were linked to the violence at Bhima-Koregaon in Maharashtra.

Visibly peeved over the action of the Pune Police, the judge said: “Nine months after Koregoan incident you go and arrest these people.”

“Nomenclature of the petition does not matter,” Chief Justice Misra said as Additional Solicitor General Tushar Mehta questioned the maintainability of the petition by Romila Thapar and others, saying “strangers” can’t seek relief for the arrested activists who had already approached the High Court.

Telling Mehta that they will hear the matter, Justice Chandrachud said: “It is a larger issue as their concern is that you are quelling dissent.”

The court issued notice seeking a response from the Centre, Maharashtra and Haryana to the petition by Thapar and other activists and directed the next hearing on September 6.

Describing the matter as a “serious issue”, senior counsel Singhvi, appearing for Thapar and others told the court that those who have been arrested were not even named in the FIR lodged after the Bhima-Koregoann incident.

Senior counsel Dushyant Dave told the court that the arrested activists had no criminal antecedents.

Another senior counsel, Rajeev Dhavan, told the court that one of the arrested lawyers was working in an organisation funded by him and expressed the apprehension that by that measure he too could also be arrested.

Indira Jaising said that five lawyers working with her were arrested in June and she may be the next.

They were to have been taken to Pune but would now be sent home and put under house arrest.