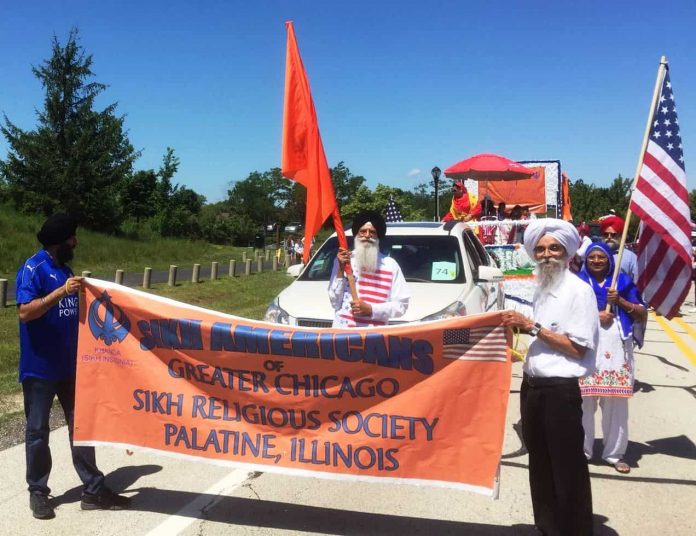 Chicago: Sikh Religious Society Palatine, Illinois, participated in the American Independence Day parade held on July 1 in the village of Palatine, a suburb of Chicago, Illinois. This annual parade with about 80 entries was organized by the Palatine Jaycees as a part of Home Town Festival during Fourth of July weekend. It’s the 61st year of this annual festival in the village of Palatine. The parade included professional entertainment, as well as entries from local organizations and businesses, local government officials, Fire, Police and other village entities.

Sikh American men, women and children affiliated with Palatine Gurdwara marched alongside a float decorated with patriotic colors. The Sikhs distributed free ice cold bottled water, and candy to the spectators all along the parade route.

The parade ended near the community park where Palatine’s Fourth of July Celebration was in full swing. The festival included fireworks, entertainment, food vendors, parade, carnival, car show, business expo and craft fair, as well as many other family activities.

“The purpose of our participation is to celebrate America’s Independence Day, and also proudly display our Sikh American community and culture,” said Rajinder Singh Mago, coordinator of the Sikh participation in the parade.

Thousands of local resident families and children lined up alongside the parade route to watch and cheer the parade and enjoy a holiday on a beautiful day. The spectators, waved, welcomed and cheered the Sikh Americans walking down the parade sporting flowing beards and colorful turbans.

“Festivals like these bring people together. It’s a great opportunity to create awareness about Sikhs, who are usually mistaken by most Americans,” said Dr. Jasvinder Singh Chawla.

An informational pamphlet “The Sikhs” was also distributed to the curious spectators.

Palatine is home to Sikh Religious Society Gurdwara, the oldest in Midwest America.