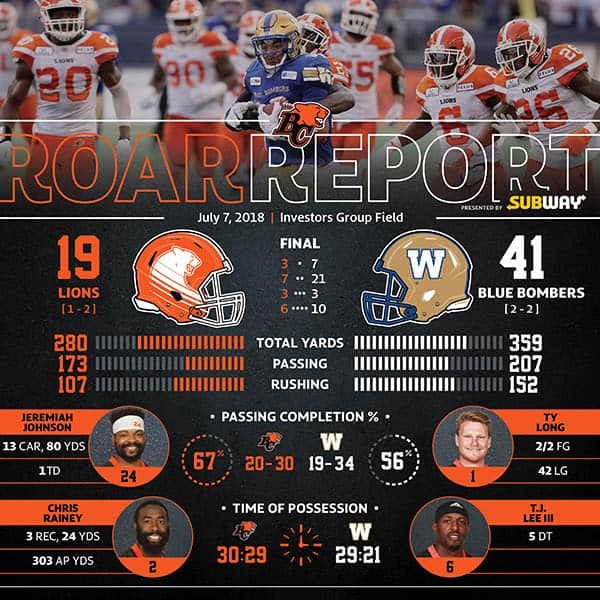 A couple of familiar faces helped seal the BC Lions’ (1-2-0) fate on Saturday night. Andrew Harris rushed for 109 yards and a touchdown while Adam Bighill had two interceptions, one that was returned for a major, as the Winnipeg Blue Bombers ( 2-2-0) prevailed 41-19 in this first contest of a home and home series.

As far as the visiting locker room was concerned, there was no sugar coating this one. And the starting quarterback was willing to take a fair share of the blame.

“Lack of execution and lack of making any plays on my part. I take the blame for a lot of that. We’re just not clicking. It’s not in sync yet.”

Jennings finished with only 105 passing yards on 15 completions before being pulled midway through the fourth quarter in favour of Cody Fajardo.

In what mirrored some of what we saw in last week’s setback at Edmonton, Jennings and the offence actually had a pretty decent start to this one, marching down the field from their own 42 yard-line on their second series of the game. After settling for a 20-yard field goal from Ty Long, Matt Nichols and the Bombers went to work.

Making his regular season debut after suffering a knee injury in training camp, Nichols connected with Darvin Adams in the end zone to give them a 7-3 lead before the first quarter came to an end. Bighill’s first interception of the night led a four-yard touchdown run by Harris and the home side never looked back.

“I had Rainey and just overthrew him,” said Jennings of that critical turnover.

“I felt push back and just tried to get it out quick, rush the throw a little bit and it sailed high on me.”

Naturally, there will be questions on who should start behind centre in next week’s rematch. Never one to jump to conclusions, head coach Wally Buono was not ready to commit to any possible changes at the position.

“Let’s look at the film and evaluate that,” said Buono.

“Offensively right now we’re not in sync at all. We’re not getting first downs, we’re not converting, so whether it’s the quarterback or other things we’re just out of sorts.”

The Lions have dropped two of three to open the regular season for the first time since 2014. The good news? Perhaps getting the chance to face these Bombers in their house next week serves as all of the motivation they need to get better. Because to a man, they know the events of these past two weeks simply aren’t good enough.

“I’m glad we get a redemption shot at them,” added Jennings.

“It’s tough to lose to anyone like that and we just want to give ourselves a shot next week. We know we can play with this team so we’re looking forward to that opportunity.”

1- the number of regular season victories Jennings has in six tries against the Blue Bombers.

2.8- the average number of yards recorded by the Lions on second down opportunities.

2,432- the total of career punt return yards for Chris Rainey after tonight. He has passed Tim Brown into 3rd place on the Lions’ all-time list.

9.1- the average yards per carry from Harris. The 31-year old continues to prove he is still the elite tailback he is.

4- the number of sacks recorded by an aggressive Bomber defence.

“We’ve got to get bulletproof defence and understand we’re gonna get some shots taken, they’re gonna score some points and we just got to keep bouncing back. We can’t be affected by those big plays that they do make and we need to make big plays ourselves.”- T.J. Lee on another sub-par outing from the defence.

There will be more questions about the inability to get to the quarterback. After shaking off some rust in his first couple of drives, Nichols was able to use good pass protection to his advantage. The Lions failed to register a sack.

Sure, for some fans it may have hurt to see Bighill come up huge on a couple of occasions. But what’s done is done. The coaching staff will remain content with the pieces that they have. The time is now for this new personnel on defence to get it right.