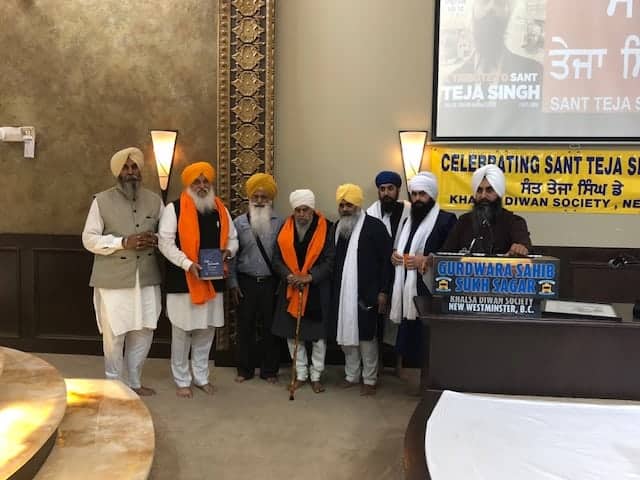 SIKH youth paid tribute to a Saint Scholar, Principal Sant Teja Singh (who earned his Masters and Law degrees from Harvard University) this past weekend.  A three-day program was organized to remember the first ‘Ambassador of Sikhism to the Western Hemisphere.’

Sant Teja Singh Ji established the Khalsa Diwan Society and had successfully proved to the Canadian government that all the Sikhs are highly capable people of constantly contributing to the economy, when the government was planning to send all the Sikhs to Honduras. Teja Singh Ji had a vision for the future of Sikhs in Canada and had laid out the foundation for them to carry his legacy forward.

The main event was on July 1, Sant Teja Singh Day, with the Akhand Path Bhog in the morning followed by Gurmat Samagam and then a conference on Teja Singh from 11 a.m. to 2 p.m. The conference at Gurdwara Sukh Sagar New Westminster, was highlighted by Dr. Khem S Gill (former Vice Chancellor of Punjab Agricultural University) with special appearances by , among others, S. Bhagwan Singh Johal (India), Dr. Sarbjit S Virk (Seattle), and Bhai Paneet Singh (Canada).

The speakers spoke about Sant Teja Singh Ji’s legacy and contributions to the South Asian community in Canada. The event was attended by many people from all over the Lower Mainland.  There was a special exhibition on Sant Teja Singh Ji hosted by the volunteers of Akal Academy. The exhibition shed light on the lasting contribution to the sangat of the Lower Mainland during his mission to the west in the early 1900s.