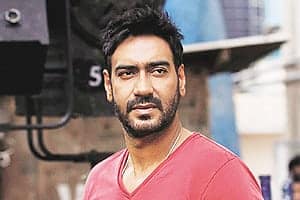 Mumbai (PTI): Having been in the industry for over 25 years, Ajay Devgn says his process of choosing a movie has become “more clear” today and he now goes forward with a project only if its script is good.

Devgn thinks today the stakes have become too high for an actor to say yes to a film out of emotional reasons.

“Earlier we would just listen to an idea and say ‘lets do it. Films were releasing left right and centre, we were doing 12 films at a time, so we did a lot of movies purely out of emotions and for relationships.

“The process of choosing a film has become more clear today. Now, it really means business. Stakes are too high, there is too many pressure,” Devgn tells PTI in an interview.

Though initially he did choose certain movies for the friendship’s sake, Devgn insists he never took on a film just to survive in the industry.

“There was never a phase where I chose a film purely to survive as there was too much work. There has always been too much work and I’ve been lucky that ways. There was no need of ‘survival’. It was either you liked a script or you do it for friends and for the emotions.”

The 48-year-old National Award-winning actor says the change in selecting a film came about with time as the audience has evolved.

“For me, it has become clear (to choose a film) not because of the external pressure but because the audience has evolved a lot. You can’t ever judge the taste accurately but you do have a barometer.

“I should enjoy doing a film, which is very important.

Filmmaking isn’t just the process of a release, it is 100 days of shooting before that. If I don’t enjoy that, I will not be able to work.”

The “Shivaay” actor, who has teamed up with Milan Luthria for the fourth time in “Baadshaho”, says working with friends help a lot as they all are on the same page.

His latest period heist action thriller is directed by Milan, who has previously given hits such as, “Once Upon A Time in Mumbaai”, “Chori Chori” and “Kachche Dhaage”.

“When you are working with someone like Milan, Rohit (Shetty) or someone with whom you have shared great rapport with, you know exactly what their mindset is and what they are looking at.

“You also know what they want from you and know that they will write keeping you in mind. All of this makes the initial process easier.”

The actor says the idea of “Baadshaho”– of a big scale robbery of a Queen’s gold–came about while they were shooting for “Kachche Dhaage” and both him and Milan just couldn’t get the story out of their heads.

“We had heard of this incident which people used to talk about in Rajasthan, where during the emergency time there was a Queen whose gold was taken away by the government but there was a guy who vanished with the gold overnight. Till today they don’t know who the person is and he never got caught.”

“Baadshaho” is scheduled to release on September 1