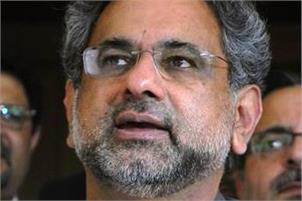 Islamabad (PTI): Shahid Khaqan Abbasi, a die-hard loyalist of Nawaz Sharif, was on Tuesday elected Prime Minister by Pakistan’s National Assembly and put up a strong defence of the ousted leader saying that he may have been disqualified by the Supreme Court but remains the “people’s premier”.

Abbasi, 58, was elected as Pakistan’s 18th premier after getting 221 votes in the House of 342, defeating his three rivals emphatically.

“Shahid Khaqan Abbasi has been declared as elected as the Prime Minister of the Islamic Republic of Pakistan,” National Assembly Sardar Ayaz Sadiq announced amid sloganeering.

He then asked Abbasi to take the seat of the prime minister and address the House.

Abbasi, while addressing Parliament after the voting, said that his election was a victory for democracy.

He heavily criticised the Supreme Court judgement which disqualified Sharif.

“I am also grateful to the opposition and Imran Khan, for remembering us in their daily slandering,” he said.

Describing the Supreme Court verdict last week disqualifying Sharif over the Panama Papers scandal as an “unprecedented decision”, Abbasi hailed his party for its unity.

“Within four days, the democratic process is back on track. There were no defections. There was no dissension in our ranks,” Abbasi said.

He praised Sharif’s leadership and principles and criticised the opposition for accusing him of corruption.

“Justice demands that 1,000 guilty are set free than one innocent is convicted,” Abbasi said.

“It is my firm belief that Nawaz Sharif will return to the seat of premiership,” he said.

Abbasi also promised that there would be no power shortage in the country after December.

“Whether I am in power for 45 days or 45 hours, I will work as the prime minister of the country and will not merely hold the post,” he said.

After the voting and counting process, many of the PML-N National Assembly members entered the House with posters of Sharif. The National Assembly Speaker objected to this and asked them to put away the placards and posters.

Abbasi will be sworn-in later at a special ceremony at the President’s House, where President Mamnoon Hussain will administer the oath to him.

He is a true loyalist of Sharif and stood with him when his government was toppled in 1999 by Musharraf. Abbasi was imprisoned after the coup and was kept in jail for two years.

The Supreme Court on Friday disqualified 67-year-old Prime Minister Sharif for dishonesty and ruled that corruption cases be filed against him and his children over the Panama Papers scandal, forcing him to resign.

According to a media report, Abbasi is facing a Rs 220 billion corruption inquiry by Pakistan’s National Accountability Bureau over an LNG contract.

Abbasi will remain premier till Shehbaz is elected to the House to take over as prime minister and lead the government till next year when the general election will take place.

Pakistan has seen such arrangements in the past too.

Earlier in the day, the opposition parties’ meeting failed to result in agreement over a joint candidate.

The National Assembly’s second biggest party in terms of numbers, the PPP, nominated Opposition Leader Khursheed Shah and Qamar. However, at the eleventh hour Shah withdrew from the election leaving Qamar as the sole PPP candidate.

Jamaat-e-Islami fielded Tariqullah as their candidate.

The PML-N party holds 188 seats in the 342-member Parliament.

Imran Khan hits out at critics against his third wedding plan

PAKISTAN: Nawaz Sharif: A PM who never completed his tenure