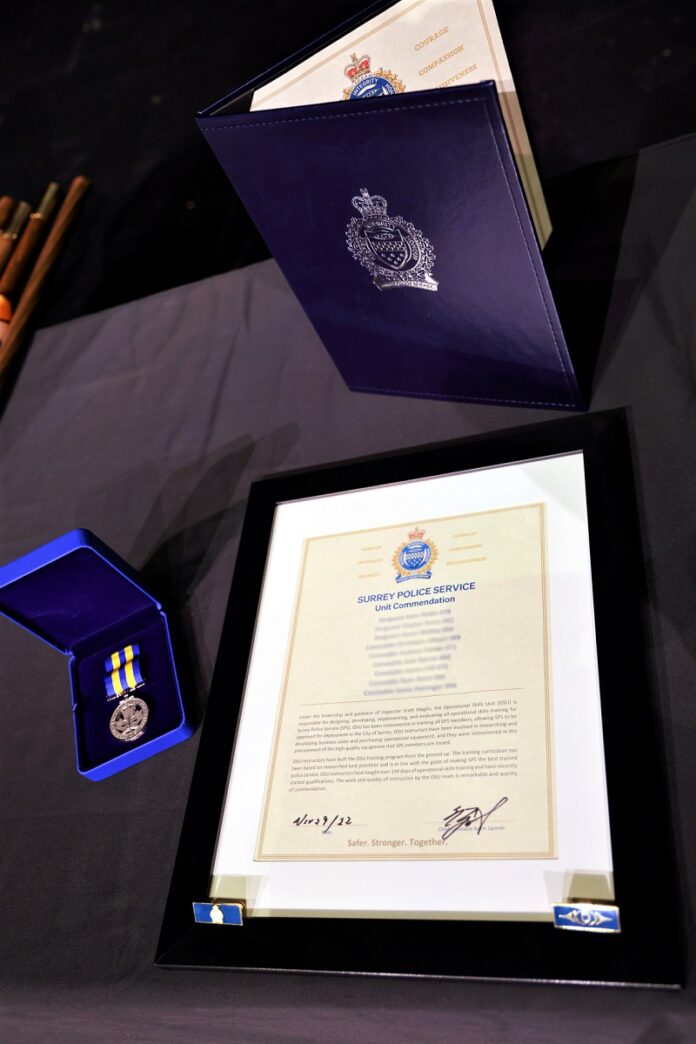 OVER the past year, there has been considerable work done by Surrey Police Service (SPS) staff in furthering the development of SPS, keeping Surrey residents safe, and supporting the community.

SPS recently recognized 16 individuals and two units for their outstanding work with a Commendation or Certificate of Appreciation. Five officers were also recognized for reaching 20 or 30 years of service in policing.

“As we continue to mark the important milestones in building a community-based policing service for Surrey, it is equally important that we acknowledge and celebrate the accomplishments of our people,” said Chief Constable Norm Lipinski on Monday.

“We are committed to fully supporting our employees – from state-of-the-art training, to supporting their mental well-being, to recognizing the great work they do.”

Eight SPS officers were acknowledged for lifesaving measures. In each of these situations, the potential loss of life was significant, if not for the quick intervention by these officers.

Detective Constable Sonu Parhar was acknowledged for the significant role he played in obtaining the confession of a suspect who was involved in multiple violent attacks in Surrey.

Three officers and two civilian employees were recognized for their extensive contributions to the local community and the policing community.

SPS also recognized two units and their respective leaders for their outstanding efforts in building and developing the training that provides the foundation for SPS to be innovative and community focused.

The 2022 awards presented by Surrey Police Service celebrate the achievements of sworn and civilian employees who have truly gone above and beyond in their efforts to build a brand-new policing service, and to enhance the profession of policing.