AS Surrey Police Service (SPS) celebrates two years since Surrey’s new municipal police service was established, it is also marking the operational deployment of over 100 police officers in Surrey.

On July 25, 35 SPS officers began their operational deployment at the Surrey RCMP detachment. This exceeds the planned July deployment of 30 officers outlined in the SPS-RCMP Human Resources Strategy and Plan to make up previous deployment shortfalls resulting primarily from federal security clearance constraints. This contingent of SPS officers is the largest single deployment of the policing transition to date.

Deployments will continue every two months, and SPS remains on track to have 295 officers deployed by May 2023. 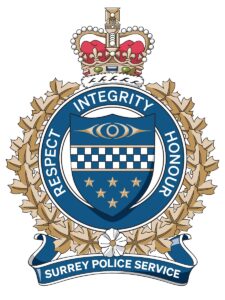 Over the last two years, the SPS crest, vision and values were developed, a comprehensive community consultation was completed, and agreements were signed with CUPE 402 and the Surrey Police Union to represent SPS civilian and sworn staff.

SPS also hired its first class of 14 police recruits, who are now training at the Justice Institute of BC. Many more milestones are yet to come as SPS continues to build a locally controlled, independent police agency for the diverse and growing city of Surrey.

“The steady, incremental progress toward Surrey Police Service becoming the police of jurisdiction in Surrey is the result of the efforts that began two years ago and have continued every day since,” says Chief Constable Norm Lipinski. “I am obviously proud of our accomplishments to this point, but I know our team always remains focused on the next challenge and on the primary objective of improving public safety for the citizens of Surrey.”

Surrey RCMP remain the police of jurisdiction during this phase of the transition, and their detachment, community offices, and phone numbers remain the primary points of contact for non-emergencies (604-599-0502), and emergencies (911).

Charges approved in 2019 hit-and-run in Burnaby that injured two police...