Surrey’s Basran, 18, earned the first belt of his career last Thursday at the United Boxing Club’s Melee Gala, and then, two days later, he won his second.

The Melee Gala is a fundraising event for Variety, the Children’s Charity. It features the “United Boxing Corporate Challenge,” in which white-collar competitors go through intensive boxing training for three months leading up to the event, and face off in the ring to raise money. 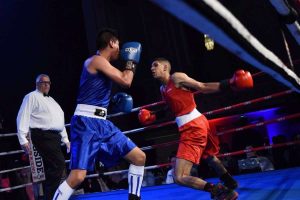 Basran, who fights in the elite men’s 56-kg category, took on Mexico’s Oscar Oswaldo Salgado Fabela and came out victorious in a 3-0 decision.

Basran was awarded “Best Bout” for his performance, along with a $1,000 bursary earmarked for personal and professional development. The bursary is awarded in honour of former Boxing Canada President John O’Shea.

Four Canadian boxers were on the card — down from six at the Melee Gala — due to injuries from the Thursday matches.

But, on the heels of winning the first belt of his career, Basran forged ahead and defeated Fabela once more, in another 3-0 decision. Not only did he win his second belt but the judges also awarded him with the prize of “Best Boxer.”