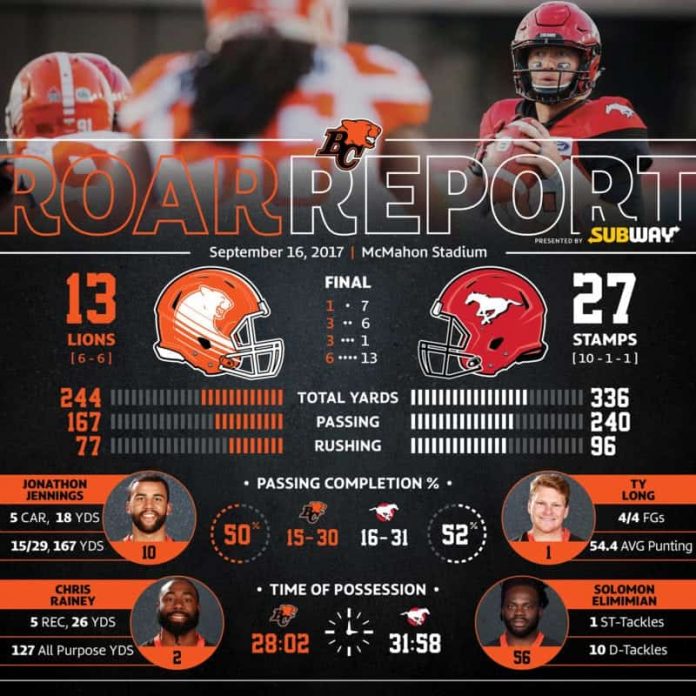 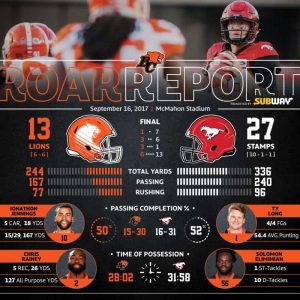 CALGARY: Emmanuel Arceneaux did his best to fire up his teammates in a rather crestfallen visitors locker room at McMahon Stadium. Number 84 is going with the simple approach: six games remain and it is up to them to prove they are worthy of playing beyond November 4th.

“The weather is changing, the air is a little thinner, so this is when you want to level up right now,” Arceneaux explained to reporters after the loss.

Arceneaux hauled in only one catch for 25 yards and that, in a nutshell, was how it went for him and the offence.

“We’re just tired of coming up short and like my high school coach always said, in order to start winning you have to stop losing. Like every interview I do, it’s always about our lack of execution. For some reason, we showed up but didn’t show out. That gets you beat. It’s one play at a time and we just put ourselves behind the 8-ball.”

All this after the BC Lions’ Alberta woes continued in a 27-13 loss to the Stampeders on Saturday night. Four field goals and a single from Ty Long was all the visitors could muster as they fall to 6-6 and last place in the super-competitive Western Division.

Jonathon Jennings struggled in his first start in nearly three weeks, completing just 15 passes for 167 yards. The third-year pivot threw three interceptions, including one to Ciante Evans on the team’s first offensive series of the night.

Wally Buono echoed the comments of most of his players and was rather blunt when asked about his squad’s lack of execution against the first place Stampeders.

“You can say whatever you want to say. That’s a good football team and they made some plays,” Buono said.

“Last week we made the plays. This week they did. I’m not going to have a pity party for the defence. They had opportunities to make plays. They had another opportunity for an interception; they had an opportunity for a couple of sacks. These are fundamental things. Did Calgary make a mistake that you can think of?”

One in particular was a dropped interception by TJ Lee in the end zone. It came right after Jennings threw one to Jameer Thurmon late in the 3rd quarter and right before Stamps’ kicker Rene Parades tacked on another valuable three points.

Jennings’ counterpart Bo Levi Mitchell passed for 240 yards and a pair of majors as the Stampeders won their eight straight and improved to 10-1-1.

The squad returns home to battle the Hamilton Tiger-Cats next Friday night at BC Place Stadium ( 8:00PM/TSN 1040/TSN 1/ESPN 3).

The mindset since the first bye week is they have to go 1-0 every week. That positive mentality certainly won’t change after this setback.

“Everyone is getting paid to make plays. We’ve got the weapons man, but it’s about having those weapons out there and letting our natural talent take over,” Arceneaux added.

It was a rather unfortunate twist of fate. Down seven in the fourth quarter, Buono accepted a Stampeders’ illegal block penalty and elected to have Rob Maver re-kick with better field position in mind. Maver avoided a rush and potential block by Chandler Fenner and ran 23 yards for a first down. They would tack on a field goal to lead by ten and all but killed the Lions’ chances for some 4th quarter heroics. The bottom line: it was at that moment where you figured it just wasn’t their night, despite the fact they had an opportunity to potentially tie it up late.

11– including playoffs, the number of consecutive losses for the Lions in the province of Alberta. Their last win in Calgary came on August 1st, 2014, while the most recent triumph in Edmonton was on July 13th, 2013.

10– total number of defensive tackles for Solomon Elimimian. He once again led the way for his club in that category.

2,000– the number of career punt return yards for Chris Rainey. The Rain Man finished with only 14 yards on five returns against the Stampeders.

54.4– the average yards per punt for Long in this one, to go along with his four field goals.

4– the number of sacks recorded by an opportunistic Calgary defence.

Solomon Elimimian not claiming any moral victories after the defence did some good things.

Twice this season the defence kept them in it against Calgary and they failed to capitalize. That will be a tough pill to swallow. The flip side is they can take it as motivation for some of the tougher games remaining on their schedule. They have been in it until late in the 4th quarter in all but one game this season. If there is a football god, at some point those balls will start to bounce in the other direction.

It seems like a common theme we talk about after every time they meet. Mitchell was able to operate with plenty of time in the pocket and it’s a nod to the Stampeders’ offensive line.

The special teams will be a big topic once again, especially after Finch was able to chew up significant yards and set his team up with good field position all night. We talked about Finch being an X-factor in our game preview and he proved to be a big thorn in the Lions’ side. The Stampeders are a balanced team and that facet is just as big a reason as any other for their recent success.

It is probably safe to say the David Foucalt experiment at right tackle did not go how they planned and hoped. Where do they go from here? Anyone’s guess.