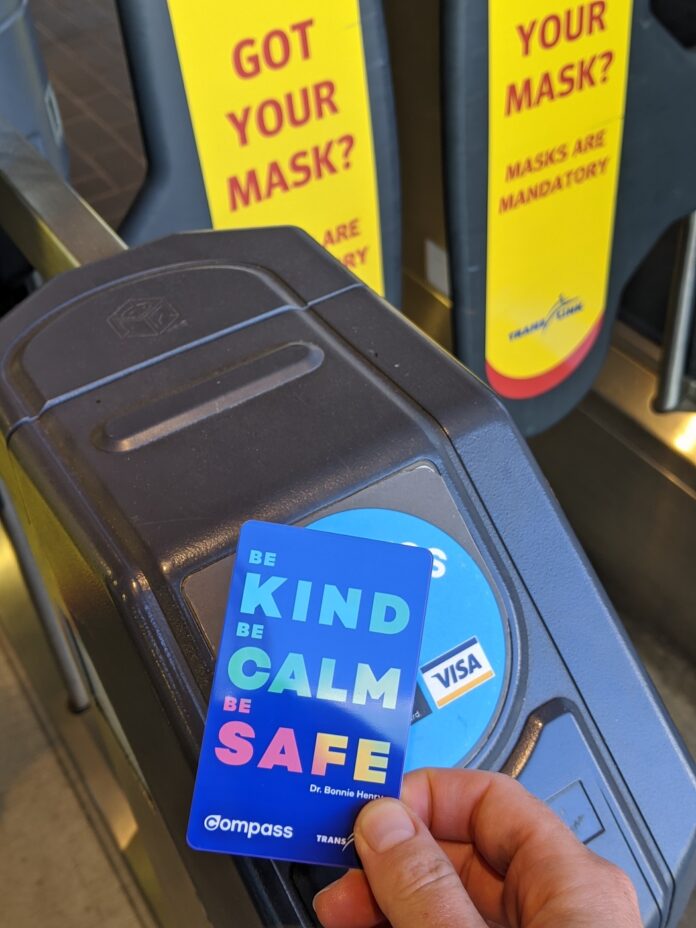 TRANSLINK announced on Monday that it is launching a new campaign aimed at boosting transit ridership while also reminding customers of the safety and reliability of its transit system. As part of this new push, a limited number of Compass Cards will be made available featuring the signature phrase of Dr Bonnie Henry: ‘Be Kind, Be Calm, Be Safe’.

“Since the restart of British Columbia’s economy in June, our regular riders have gradually been returning to transit,” said TransLink CEO Kevin Desmond. “We want to continue to build ridership over coming months, with systemwide ridership currently sitting at around 43 per cent of pre-pandemic levels. TransLink’s Safe Operating Action Plan includes several enhanced safety initiatives to ensure customers know that transit is a safe and reliable alternative to driving as British Columbia’s economy continues to reopen.

”TransLink bridge data shows that traffic congestion has returned much faster than transit ridership. The Golden Ears, Knight Street, and Pattullo bridges are now seeing traffic at around 93 per cent of pre-pandemic levels. Ensuring commuters have confidence in transit is vitally important to limiting any further road congestion, while also reducing greenhouse gas emissions.

Over the next few weeks, customers will see new signage at transit stations, on vehicles, and online, designed to remind passengers of improved sanitization and cleaning procedures put in place to further enhance their safety. In addition, passengers will start seeing new social media content, including contests, as well as partnerships with local small businesses, webinars, and other engagement opportunities.

“I applaud the safety measures and layers of protection put in place by TransLink, especially as more people return to work and school,” said B.C.’s Provincial Health Officer Dr. Bonnie Henry. “By wearing a mask on transit, you are looking out for each other and demonstrating to those around you that you care about their health too.”

What TransLink is doing to make transit safer:

What customers can do to enhance their own personal safety and that of fellow passengers: