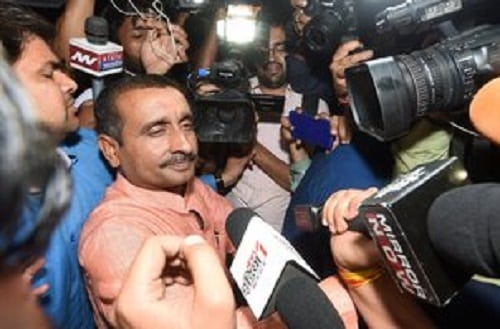 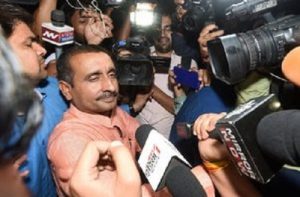 New Delhi (PTI): The CBI on Saturday made a second arrest in the Unnao rape case as it took into custody Shashi Singh, the woman who allegedly took the victim to BJP MLA Kuldeep Singh Sengar on the day of crime, officials said.

A special court in Lucknow has sent Sengar, the prime accused in the case, to a seven-day CBI custody, they said.

In her complaint to UP Police, now part of the CBI FIR, the victim’s mother has alleged that Shashi Singh had lured her daughter and took her to Sengar’s residence where he raped her.

She has also alleged that while the MLA was raping her daughter, Shashi Singh stood outside the room as a guard.

The agency arrested the BJP MLA from Bangarmau last night after 16 hours of questioning at its office in Lucknow.

After a massive public outrage over the inaction of the UP police, the case was handed over to the CBI on April 12. The agency took over the investigation in three cases related to the alleged rape of the 17-year-old girl by the BJP MLA.

Within hours of taking over the investigation, the CBI brought Sengar, who had remained untouched by the state police, to its office in Lucknow, where he was questioned for nearly 16 hours before being taken into custody.

In a scathing order yesterday, the Allahabad High Court slammed the inaction by the Uttar Pradesh government and the state police. The court underlined that in spite of complaint from the victim to Chief Minister Yogi Adityanath on August 17, 2017, no substantial action was taken by the police.

“The disturbing feature of the case is that the law and order machinery and the government officials were directly in league and under the influence of Kuldeep Singh,” a bench of Chief Justice Dilip Bhosale and Justice Sunit Kumar said.

“The prosecutrix and her family members have been running from post to pillar but her complaint was not registered, despite approaching the chief minister. The influence of the accused is such that the circle officer also declined to lodge the report on the complaint duly forwarded by the office of the chief minister,” it said.

The agency, which was referred the matter on Wednesday, took immediate action by re-registering the FIRs filed by the Uttar Pradesh Police.

A team visited the crime scenes in Makhi village in Unnao district and talked to the victim’s family, witnesses and officials of the hospital where the victim and her father were taken for treatment.

The first FIR pertains to the alleged rape of the girl in which Sengar and Shashi Singh have been named as accused.

The second pertains to rioting, in which four locals have been booked, and the alleged killing of the victim’s father in judicial custody. Since the murder charge was added later by the state police, it does not reflect in the CBI FIR.

The third case pertains to the allegations against the victim’s father, who was arrested by the police under the Arms Act and put in jail, where he died. According to the post-mortem examination report, he had suffered serious injuries.

According to the rules, the CBI re-registers the FIRs filed by a state police when taking over a probe, but remains at freedom to arrive at its own conclusions, which are filed before a special court in its final report.

The final report can either be a closure report or a chargesheet.

The victim has alleged that on June 4, 2017, she was raped by BJP MLA Sengar at his residence, when she had gone to meet him, along with a relative, seeking a job.

In February, the girl’s family had moved the court, seeking to include the MLA’s name in the case. Subsequently, the victim’s father was booked by the police under the Arms Act on April 3 and put in jail on April 5.

Frustrated with the alleged police inaction and coercion from influential people, the victim attempted self-immolation in front of Chief Minister Adityanath’s residence on April 8.

The next day, her father died in jail with the post-mortem examination report suggesting serious injuries on his body.

Sengar, a four-time MLA, enjoys an immense clout, cutting across party lines, in rural areas of Unnao district, a semi-urban area about 70 km from Lucknow.

A video, purportedly showing the victim’s father before his death, has gone viral. Several television news channels have also aired it.

In the video, the victim’s father alleged he was mercilessly beaten up, including with rifle butts, by the MLA’s brother and others in presence of police personnel.