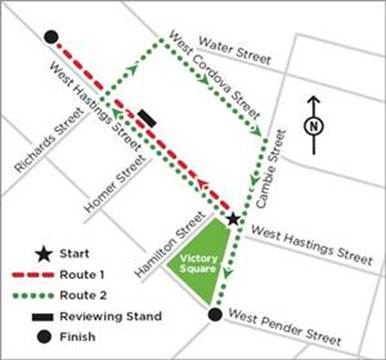 IN honour of our veterans who made the ultimate sacrifice on behalf of Canada, the City of Vancouver is holding its annual Remembrance Day ceremony and parade at Victory Square on Saturday, November 11.

The program begins with a performance by the Vancouver Bach Youth Choir and Sarabande starting at 10 a.m.

At 10:10 a.m. veterans, military marching units and bands will be led to Victory Square by the Vancouver Flag Party for the cenotaph ceremony starting at 10:30 a.m.

Shortly afterward, there will be a combined performance by Vancouver Fire and Rescue Services and the Regimental Pipes and Drums of the Seaforth Highlanders of Canada.

At 11 a.m. the Last Post will be sounded. There will be two minutes of silence, during which a 21-gun salute by the 15th Field Artillery Regiment will be heard from Portside Park. Lament and Rouse will follow. The Royal Canadian Air Force will conduct a fly-past moments later, weather permitting.

The enduring In Flanders Fields will then be sung by the Bach Youth Choir and Sarabande and wreaths will be placed at the Cenotaph.

The Remembrance Day parade will begin once the ceremony finishes. Participants will march west along Hastings past the reviewing stand between Homer and Richards, turning right at Richards, east on Cordova, then south on Cambie (Route 2 on the map).

The veterans’ section of the parade will march Route 1, marching west along Hastings Street past the reviewing stand and disperse.

The Remembrance Day Service at Victory Square is organized by the Vancouver Remembrance Day Committee, a volunteer group established by the City in the 1940s with the mandate to conduct the November 11 ceremony on behalf of its citizens.

Vehicles displaying BC veteran licence plates will be exempt from parking fees for Veterans Week until November 11 at:

* EasyPark parkade and surface lots; and

* In all parks and community centres in Vancouver.

IN honour of Remembrance Day, TransLink and its operating companies will once again provide free transit to our many heroes – including Armed Forces, police, fire, ambulance and Coast Guard on Saturday, November 11.

Free transit is available to eligible members on all services, including HandyDART and Canada Line YVR-AddFare. One accessible fare gate will remain open at all SeaBus and SkyTrain stations from 8 a.m. to 6 p.m. Transit will be free all day on buses for Veterans and eligible members. These veterans and eligible members will not be required to tap their Compass Cards, but membership cards should be displayed or that members should appear in uniform when boarding buses or entering a fare-paid zone. The rest of the public, will only need a one-zone fare for travel across the network.

Buses will operate on a holiday schedule.

Translink will be observing a moment of silence at 11 a.m., with all SkyTrain, SeaBus and buses observing this moment at the stop reached closest to the hour.

Remembrance Day observances will also take place in different communities throughout the city on November 11.

3811 Point Grey Road (can be viewed from Hastings Mill Park)

Delta will be holding our official Remembrance Day ceremonies in both North and South Delta on Saturday, November 11. The North Delta ceremony will take place at the North Delta Social Heart Plaza on 84 Avenue, commencing at 10:40 a.m. A reception will follow at the North Delta Recreation Centre, hosted by the Kennedy Seniors Society.

In South Delta, the ceremony will be held at the Cenotaph in Memorial Park in Ladner. The Parade will start at 10:15 a.m. from the Royal Canadian Legion at 4896 Delta Street and end at the Cenotaph for the 10:45 a.m. ceremony.

Visitors are invited to warm up at the Surrey Archives from 9:30 a.m. to 1:30 p.m. for family friendly activities, including refreshments, crafts, wartime displays and the opportunity to write postcards for war veterans.

Free public parking is available throughout Cloverdale and at Cloverdale Traditional Elementary School. The Surrey Museum and parking lot are currently closed due to construction.