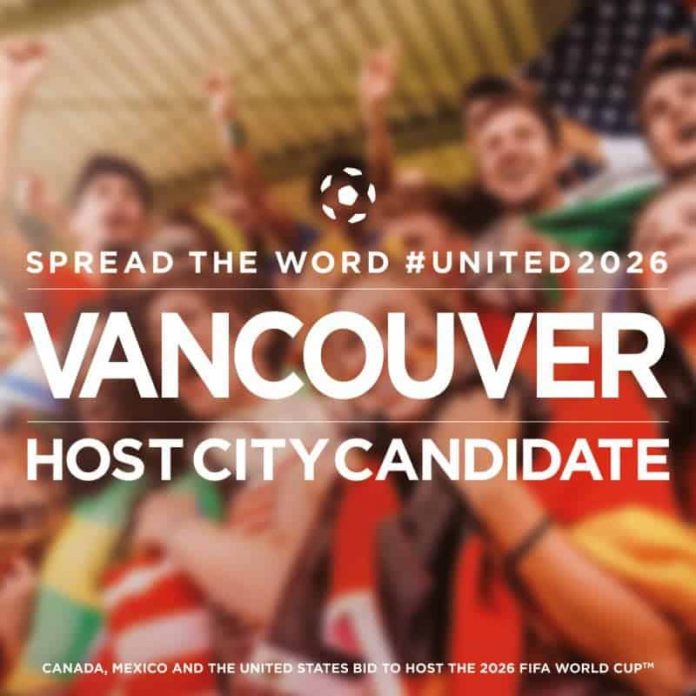 VANCOUVER was shortlisted on Wednesday as a candidate host city in the United Bid to stage the 2026 FIFA World Cup, taking the city one step closer to being part of world’s biggest sporting competition, the City of Vancouver announced on Thursday.

The United Bid Committee, which is coordinating North America’s proposal to host, included Vancouver on their 32-city shortlist for hosts alongside Montreal, Seattle and Miami.

In deciding the shortlist, the United Bid Committee considered factors such as city profile, stadium and support facilities, and infrastructure. Nine cities, including Ottawa and Regina, have been cut from the original longlist which was announced in August.

Speaking about the bid, Mayor Gregor Robertson said: “I’m thrilled Vancouver is shortlisted as a FIFA 2026 World Cup host city. Our Sport Hosting Vancouver partners put together a compelling story that showcases Vancouver’s world-class hosting reputation and experience and we would be honoured to welcome the world again in 2026.”

The FIFA World Cup, which takes place every four years, is the largest sports event in the world and the Brazil 2014 edition attracted over 3.4 million spectators. FIFA 2026 will be the first to feature an expanded field of 48 teams and, if the tournament is award to North America, 10 matches will be held in Canada.

The announcement comes at a time when Vancouver Whitecaps are topping the MLS Western Conference, an achievement which builds on Vancouver’s reputation as a strong sporting city having hosted the 2010 Winter Olympics and 2015 FIFA Women’s World Cup.

The United Bid Committee will submit the North American proposal in March 2018 and FIFA will announce on June 13, 2018 whether they have awarded the 2026 World Cup to North America or Morocco – the only other country bidding for the event.

If the North American bid is successful, FIFA will work with cities to create a sports development strategy that ensures a social, economic and environmental legacy.