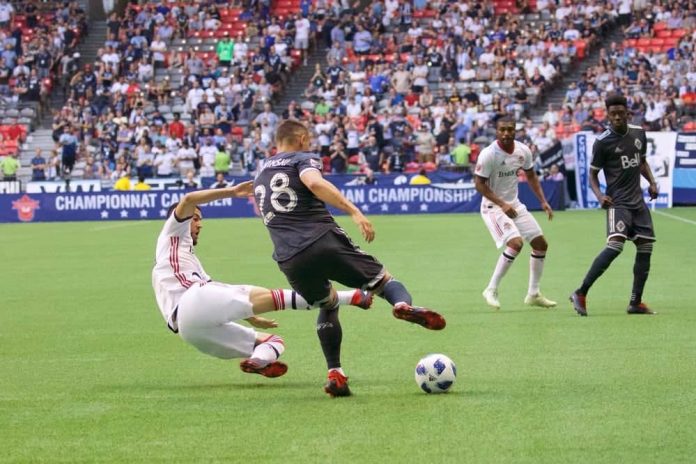 VANCOUVER, BC: Vancouver Whitecaps FC will head to Toronto next week with the Canadian Championship final in the balance after a thrilling 2-2 draw in the first leg at BC Place.

On a sweltering night in Vancouver this match had all the ingredients of a cup final between two old rivals – high-quality goals, hard tackles, and a passionate crowd.

The game began in a cagey fashion before Tosaint Ricketts’ handball gave Vancouver a penalty in the 25th minute. Kei Kamara, who now has seven goals in his last six games at BC Place, stood up and calmly slotted the penalty beyond Clint Irwin via the post.

But Toronto FC were instantly level. Marco Delgado whipped in a ball that was finished beautifully on the volley by Jonathan Osorio, who found space in the box to score his 15th goal of the season in all competitions.

The ‘Caps then faced further setback when they were controversially reduced to 10 men just before halftime, when midfielder Felipe was shown a straight red card for a tackle on Toronto’s Delgado.

Despite being down to 10, the ‘Caps continued to fly forward in the second half as they had the better chances. Yordy Reyna came close but could not quite finish off Jake Nerwinski’s inviting cross before Alphonso Davies nearly scored another wonder goal, dancing through numerous defenders only to hit his shot straight at the goalkeeper.

Vancouver looked to be heading to Toronto with an aggregate lead when substitute Erik Hurtado, who also netted a late equalizer against New York City FC on Saturday, slid home Russell Teibert’s delightful ball in the 84th minute.

But with the final kick of the match, Doneil Henry unfortunately directed a header into his own net after a header into the box from Jozy Altidore to end the night on a sour note after a gutsy performance from the ‘Caps.

The ‘Caps are back on the road in MLS play this Saturday, August 11 when they face Portland Timbers. Kickoff is at 8 p.m. live on TSN1 and TSN4. The ‘Caps then travel to Toronto on August 15 for the second leg of the Canadian Championship final at BMO Field. Whitecaps FC are back at BC Place on Saturday, August 18 when they host New York Red Bulls. Visit whitecapsfc.com for ticket information.