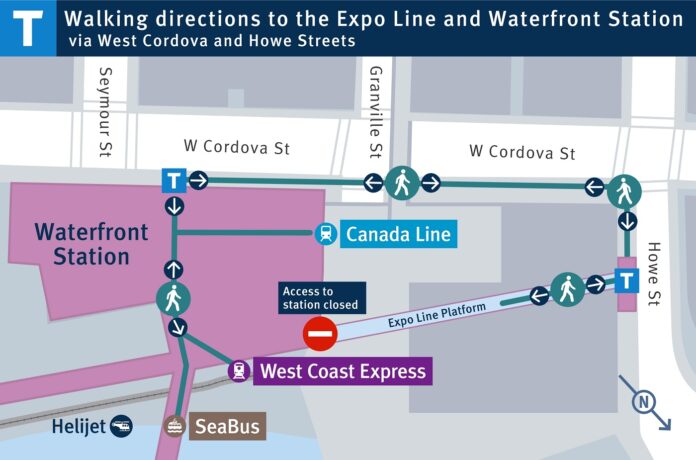 BEGINNING June 12, the eastern entrance to Waterfront’s Expo Line platform will be closed for approximately three weeks. This closure is necessary to ensure customer safety during the replacement of the escalators, which requires the use of heavy machinery.

TransLink has expedited this project while ridership remains low – this will minimize the impact to customers while delivering the project earlier than planned. Once complete, the new escalators will be more durable and reliable for customers using Waterfront Station.

During the construction period, Waterfront Station’s Expo Line platform will only be accessible from the western entrance on Howe Street. Customers seeking to transfer between the Expo Line and the Canada Line, SeaBus, or West Coast Express should plan extra travel time into their commute to walk between the Howe Street entrance and the Cordova Street mezzanine.

Importantly, there will be no elevator access to Waterfront Station’s Expo Line platform during construction. For customers requiring elevator access, TransLink will be running a shuttle bus service between Waterfront and Burrard stations. The shuttle will run every 15 minutes between 5 a.m. and 10 p.m. on weekdays, and between 6 a.m. and 10 p.m. on weekends. Customers can board the shuttle at the following three stops:

This critical investment is part of TransLink’s initiative to keep escalators operating safely and reliably through the Maintenance and Repair Program.

Waterfront Station’s escalators were installed over 30 years ago and have seen ridership levels quadruple. The new escalators are designed to support higher volumes of passengers and will have less downtime for maintenance.

For customers requiring elevator access, below is specific advice for each scenario

Customers travelling from SeaBus to Expo Line should:

Customers travelling from West Coast Express to Expo Line should:

Customers travelling from Canada Line to Expo Line should:

Customers travelling from Expo Line to West Coast Express or SeaBus should:

Customers travelling from Expo Line to Canada Line should:

Customers travelling from Expo Line to access Waterfront Station should:

THE Province is urging caution and encouraging the public to prepare for localized flooding as water levels are expected to rise in...
Read more

JUST after noon on June 24, Langley RCMP received a report of an erratic driver traveling eastbound in a Mazda on Highway...
Read more