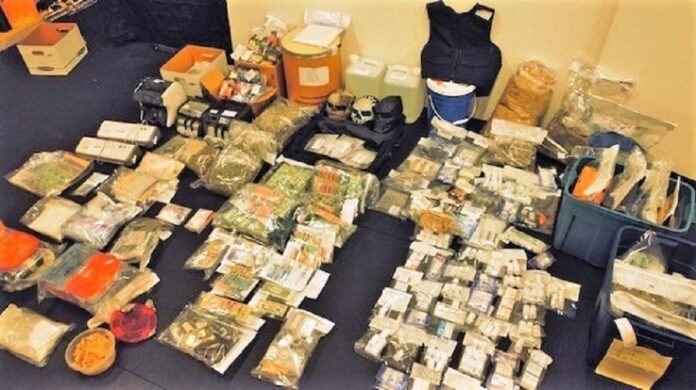 A lengthy investigation by BC RCMP Federal Policing investigators, in collaboration with the Federal Bureau of Investigation (FBI) of Los Angeles, California, has culminated in the arrest of several individuals, and the seizure of dozens of different drugs along with a large amount of cash, gold and silver bars.

Between September and December last year, the Vancouver Island-based teams of Federal Serious and Organized Crime – Major Projects investigators executed a series of search warrants and other enforcement actions in connection with a drug trafficking investigation.

The searches of five vehicles, and six residences in Vancouver and Victoria resulted in the arrest of six people, and the seizure of drugs, Canadian currency, gold and silver bars.

The drugs seized consisted of:

(Buff is a substance that is added to cocaine, or other drugs, to increase profitability by increasing the weight while effectively reducing the drug content per gram.)

“In BC, criminal organizations have made significant investments in the illicit drug trade which has had a lasting negative impact on our society,” said Superintendent Richard Bergevin, Officer in Charge of BC RCMP Federal Serious and Organized Crime – Major Projects, on Thursday. “The damage to our communities is immeasurable and families across our country continue to feel the losses to overdose and addiction.”

No charges have yet been laid but the investigation is ongoing

Remembering 9/11: Events 20 years ago moved many to serve in FBI

The Vancouver Plan will be presented to City Council on July...