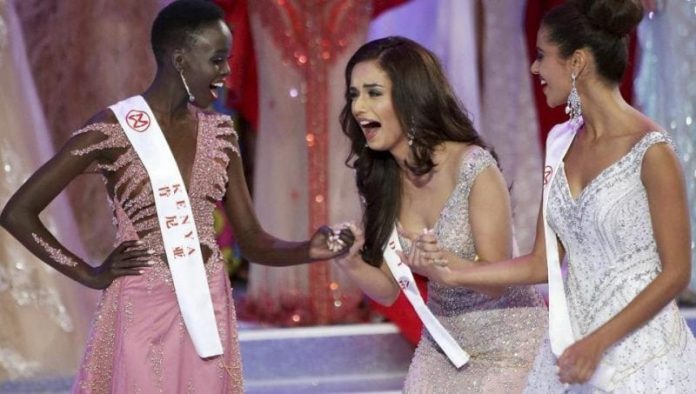 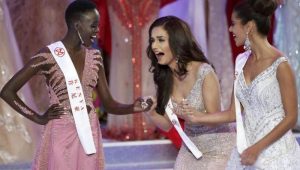 INDIA’S Manushi Chhillar on Saturday won the coveted Miss World 2017 crown at a grand event in China, bringing to an end the country’s dry spell of 17 years at the top pageant contest.

The 20-year-old from Haryana, who is a medical student, edged out top five contestants from England, France, Kenya and Mexico at the event, which saw participation from 118 countries.

Chhillar was presented the crown by Stephanie Del Valle, the last year’s Miss World winner from Puerto Rico at an event held at a resort in the coastal city of Sanya.

“Thank you, everyone, for your constant love, support, and prayers. This one’s for India,” Chhillar wrote on her official Twitter handle.

The first and the second runners-up were Miss England Stephanie Hill and Miss Mexico Andrea Meza at the event, which was televised live globally.

In the top five round, Chhillar was asked which profession according to her deserved the highest salary.

“I think a mother deserves the highest respect and when you talk about salary it’s not always about cash but I feel it’s the love and respect that you give to someone. My mother has always been the biggest inspiration in my life.

“All mothers sacrifice so much for their kids. So, I think it is the job of a mother that deserves the highest salary,” Chhillar said to a wide-applause.

Chhillar is the sixth Indian to win the coveted crown, which was first won by Reita Faria back in 1966.

Chhillar’s win brings India at level with Venezuela as the countries with most victories in the history of the pageant.

“Congratulations @ManushiChhillar! India is proud of your accomplishment,” he said in a tweet.

In a statement, Chhillar said: “The feeling is still sinking in and very excited to make India proud too. I’m also looking forward to the year ahead.

“My parents have always been my pillar of support and having them here tonight by my side has only brought me more strength and joy. My final answer also came to me by having them here with me in front of me”.

According to Chhillar’s profile on the Miss World website, her father, Dr. Mitra Basu Chhillar, is a scientist at the Defence Research and Development Organisation, while her mother, Dr. Neelam Chhillar, is an associate professor and department head of neurochemistry at the Institute of Human Behaviour and Allied Sciences.

Chillar studied at St. Thomas’ School in New Delhi, and is pursuing a medicine degree at the Bhagat Phool Singh Government Medical College for Women in Sonipat.

She aims to be a cardiac surgeon and wants to open a chain of non-profitable hospitals based in rural areas.

A trained Indian classical dancer, Chhillar has a passion for outdoor sports and actively participates in paragliding, bungee jumping, snorkelling and scuba diving besides sketching and painting.

Her personal motto, as described on the website, reads: “When you cease to dream you cease to live” and “Courage to give flight to your dreams and the ability to believe in yourself makes life worth living”.