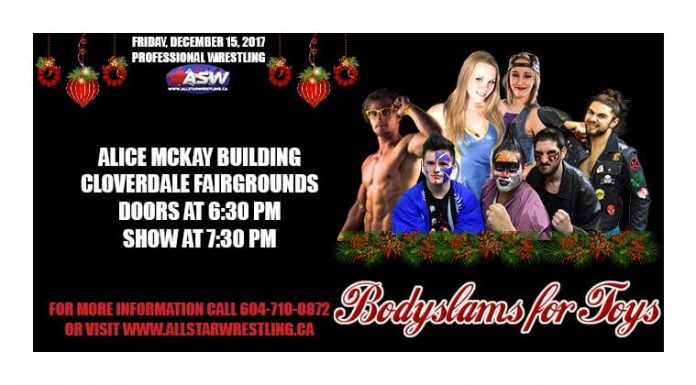 Ladies and gentleman boys and girls All Star Wrestling presents BODY SLAMS FOR TOYS!!!
On this night we take pride in helping become possible for some needing people. With every minimum 10 dollar unwrapped toy you the fans will receive a ticket to a 2018 wrestling show. So Friday Dec 15th come one come all and lets make a difference for the SURREY CHRISTMAS BUREAU and watch the bodies of ASWCANADA entertain you.

MAIN EVENT I QUIT Match
Former ASW Cruiserweight Champions Battle it Out!
Matt Xstatic vs Kobra Kai
This feud has went on for almost a year. Both of these guys have been the Cruiserweight Champion and both of these guys have made it known that they have what it takes to beat the other. When the bell rings you the fans will witness a technically sound mat classic. The only way to win this match is to make your opponent say “I Quit”.

Tag Team Action
Team Storm Academy (Jordie Taylor & Love Ludgren) vs Tokyo Raiders
Tokyo Raiders are staple in ASW although not fan favorites in the least. Tokyo Raiders have made it known that they are a force to reckon with and don’t stop until they get what they want and thats a win. Jordie Taylor is relatively new to ASW but has already found public enemy in the Raiders. After several attempts to have a fair fight Jordie was simply out numbered until a fellow Storm Academy alumni Love Ludgren came to his aid. Finally the odds are even and the fans are ready.

Girls Tag Team Match
The Hall Sisters vs Malia Hosaka and Allie Parker
Bambi Hall is the former Girls Gone Wrestling Champion and her sister Lizza are always ready to face anyone that wants to fight. Malai Hosaka just fresh off of her championship win over Bambi wants to show just how convincing she is and can be. Allie Parker has been turning heads everywhere she goes and has said she is willing to do anything and wrestle anyone who will elevate her to the top. Allie Parker will team with Malia and will try to work in unity to defeat the talented and tough sister duo.

ASW Cruiserweight Title
Nathan Kabe(New Champion) vs Mike Santiago
Kabe just recently won the Cruiserweight Title November 11th from Matt X Static. Santiago is a former ECCW Canadian Champion and one of the most outspoken and controversial wrestlers in the Pacific Northwest! Will Kabe be able to hold onto the belt in his first title defense? Or will Santiago win a the title his first night in ASW??

Bring a new unwrapped toy for a boy or girl and receive a complimentary ticket for any ASW event in 2018. Toy must have at least a $10 value.
**Midget Wrestling Warriors shows not included in this offer.**

Tickets are on sale