SANTA’S helpers from communities across the Lower Mainland merrily made their way to the grand toy count in Richmond last Saturday for the 16th Annual Victor Ghirra Toy Drive.  With families in the province still challenged by COVID-19 and increasing inflation, there was an even greater need for toys over the holidays.  Over 100 people attended the grand toy count event to drop off toys and donations.

This year, the indoor event welcomed attendees with a festive holiday theme.  Volunteers greeted guests as they dropped off toys, with many staying to enjoy coffee and treats and posing for photos in the Winter Wonderland booth.

The toy drive is donating toys to a record 18 good causes this year. The hope is to bring some joy to children and families in need this holiday season.  With the help of the Benevolent Brotherhood Society (BBS), the Ghirra family, The Co-operators Insurance agencies, Riverside Banquet Halls, Johnston Meier Insurance, Kids Play team and Vancity Credit Union, over 2,500 toys were collected.

In memory of the man with a golden heart, the toy drive is devoted to making holidays brighter for hundreds of boys and girls.  Michael Ghirra, Victor’s younger brother, said: “Nobody knew, Victor did this out of the kindness of his heart.  He would be very happy to know what we are doing.  The toy drive means a lot to me and my family to keep his giving spirit alive.”

Victor was involved in many charitable initiatives, but one charity that Victor was really touched by was the BC Children’s Hospital. A heartwarming story that depicts Victor’s character was when he bought toys worth thousands of dollars every Christmas and donated them anonymously to Children’s Hospital to needy children.  When asked who he was and where the toys were from, Victor would simply reply, “It doesn’t matter who I am or where I am from, these toys are for the kids and that’s all you need to know.”

It was later found that Victor had made trips to the hospital for over a dozen years.  Victor was just being Victor, he didn’t tell anyone what he was up to.

Victor left a lasting impression on his colleagues, many of who still remember his charitable nature.  Moya Matick, Agency Office Manager with The Co-operators said: “When you reflect on the man whose memory the toy drive honours and learn just how kind he had been in life, it is not too difficult to understand how that memory energizes and motivates us to continue his legacy.  Each year, as word of the toy drive spreads, the success grows.  This year Co-operators Insurance staff in the Lower Mainland contributed $900 in cash donations and over 50 new toys to help. It is heartwarming to know that our efforts contribute to preserving a spirit of giving and care to those kids who need it most.”

Once again, the kind-hearted Richmond Sunrise Rotary group supported the toy drive with a donation of $3,500 to purchase toys. During a recent meeting, members got together and bought and donated toys they thought would be fun to play with. Kal Mahal, Richmond Sunrise Rotary member, said: “Victor’s toy drive has become a Richmond tradition; it’s a wonderful way to give back to families who need it most during the holidays. Our members look forward to the toy drive and enjoy helping.” 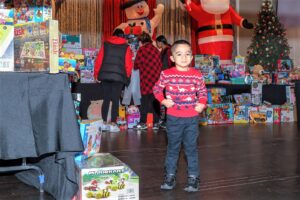 Jerry Gamble of Johnston Meier Insurance worked with Victor and stepped up once again to help. “I’m proud to say that for the third year, we contributed $500 in toys to Victor’s toy drive. I so enjoyed working with Victor, he was such a kind person to be around, and he had a way with people that made you want to do better.  I feel this toy drive is a great way to pay tribute to him.”

Harvey Kooner of BBS, founder of the toy drive, said: “This year the need was greater than ever. We heard that families needed more help and we were happy to step up. This year there will be hundreds of children who will receive a toy during the holidays thanks to Victor’s legacy.  This toy drive continues to grow thanks to all our partners and generous community donors of the past 16 years.”

The toy drive welcomed a new donor this year: Cedar Chiropractic and Physiotherapy Clinic in Burnaby.  They saw the opportunity to give back through the toy drive and wanted to support a wonderful cause.  For more information on how you can make get involved and make a difference with next year’s toy drive, contact Harvey Kooner at 604-671-4180 or harveykooner1@gmail.com.