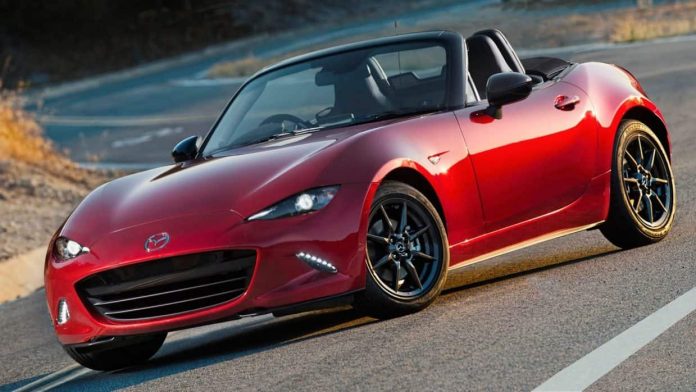 RICHMOND HILL, ON, – The Mazda MX-5 has never been about power; it’s a car whose sole purpose is to help the driver and passenger fall in love with driving. But, a little extra power never hurts, which comes as one aspect of numerous updates for the 2019 model year.

For the fourth model year of the ND generation, Mazda’s engineers enriched MX-5’s SKYACTIV-G 2.0-liter engine with the goals of improved response, performance, feel and efficiency. The net results are 181 horsepower at 7,000 rpm—a 17-percent improvement—and 151 lb-ft of torque at 4,000 rpm, with a richer torque curve throughout MX-5’s entire rev range. Speaking of rev range, redline has increased from 6,800 rpm to 7,500 rpm. Engineers were able to increase performance through several means, including: Reducing internal mass and friction.

There is also a new exhaust system with richer sound quality. In addition, the transmission’s final drive ratio has been increased from 3.454 to 3.583 in order to improve linear response to match the driver’s intentions. Gear ratios are otherwise unchanged from previous models.

As a result of numerous changes, MX-5 aims to be quicker, more responsive and more engaging to drive, adhering to Mazda’s unique Jinba Ittai—”horse and rider as one”—engineering philosophy. Beyond engine improvements, the 2019 MX-5 introduces an available brown canvas soft top, new black metallic 16 and 17-inch wheels, a newly telescoping steering wheel (42mm of travel), easier-to-open doors and revised door stops and revised cupholders and seat levers. On the safety front, the 2019 MX-5 will be sold with a new rearview camera and newly available features such as Traffic Sign Recognition and Smart City Brake Support in addition to other i-ACTIVSENSE safety technologies found throughout various trim levels. In the process of gaining many new features, the 2019 MX-5 gains just 3 kg (7 lbs.) from previous models, owing to a strict adherence to Mazda’s “Gram Strategy” and ingenious solutions like adopting an aluminum steering shaft in place of the previous steel unit.

When the fourth-generation MX-5 launched, its development team rallied around the idea of innovating in order to preserve. The latest round of innovations aim to continue that mission.

The 2019 Mazda MX-5 will be available in Canada this summer, with pricing, packaging and full specifications to be announced closer to on-sale timing.