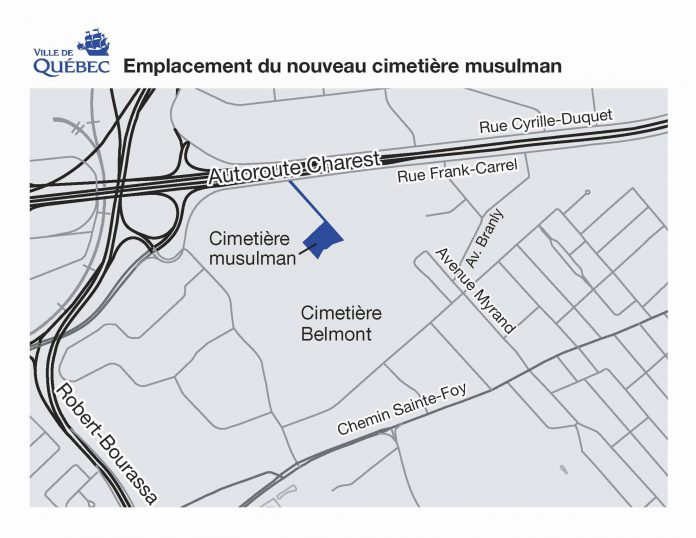 THE City of Québec on Friday announced that it has accepted, subject to the approval by City Council, an offer submitted by the Centre Culturel Islamique de Québec (CCIQ) to purchase municipal land that will allow the construction of a cemetery for the Muslim community in the greater Québec City region.

The selling price of the land set at $270,000 plus applicable taxes has a surface area of 5,706 square metres and is located south of Frank-Carrel Street adjacent to the Belmont cemetery. Current zoning regulations allow the establishment of a cemetery on this land and, therefore, no changes to zoning are required.

“For over 400 years, Québec has been a welcoming city for all cultures, languages and religions. Vivre ensemble [Live together], regardless of our origins, is fundamental to the success of our society,” declared the Mayor of Québec City, Régis Labeaume. “With the establishment of a cemetery for the Muslim community in the region, vivre-ensemble takes on all its meaning.”

“The CCIQ is pleased with the successful resolution of the Muslim cemetery project in the City of Québec with the purchase agreement for land that is in compliance with zoning regulations,” declared CCIQ President, M. Mohamed Labidi. “We would like to sincerely thank Mayor Labeaume and the City for the short transaction time as well as our volunteers and all those who helped to realize this historic project for the Muslim community in the region.”

“It is with a sense of relief that the Muslim citizens in the Québec City region will hear the announcement today of the establishment of their own cemetery which has been awaited for almost 20 years. Several Muslim families in Québec will no longer have to endure the sorrow of the remoteness of their deceased loved ones grave site,” declared Boufeldja Benabdallah, interim coordinator of the CCIQ cemetery project. “Today, their call has been heard and encouraged by a large number of fellow citizens across the country and several public and religious figures who are all working to better live together and to die in peace and in respect.”

The City of Québec has been concerned by this situation since 2008. At the time, the CCIQ expressed an interest in the land owned by the Belmont cemetery. The transaction between the parties was not concluded given the various technical and regulatory constraints. Over the course of the following years, the City acquired surplus land owned by the Belmont cemetery, including the land in question, for various purposes.

The recent CCIQ project in another municipality having not worked out, discussions resumed with the City to find land. The actual configuration of the property therefore allows the City and the CCIQ to reactivate the project adjacent to the Belmont cemetery with the sale of parcels of land that will permit the construction of the Muslim cemetery and an access road.

“With this cemetery, the members of the Québec Muslim community will finally have a place in the heart of the their city where the bereaved families can gather and will allow the deceased to have a final resting place close to their loved ones,” added Labeaume. “The entire population can thus live together and continue to thrive. The City of Québec offers its full support to the community and the Centre Culturel Islamique de Québec so that the project is carried out rapidly.”