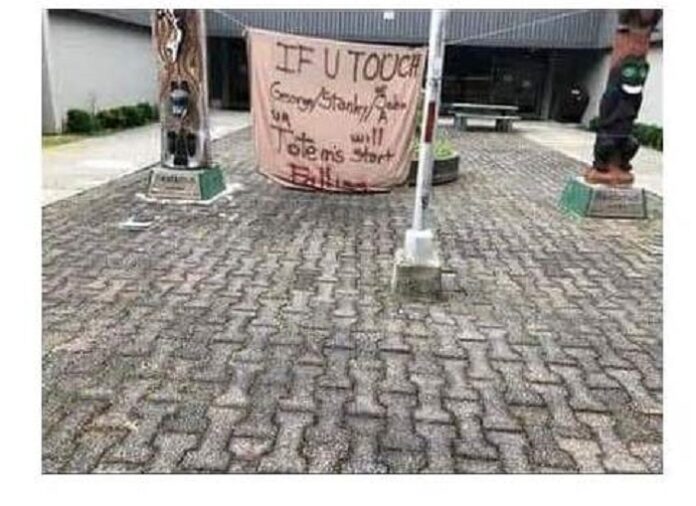 ON July 7 there were two acts of racist anti-Indigenous vandalism on the Sunshine Coast. A large banner was hung across two totem poles at the Pender Harbour School that read “IF U TOUCH George/Stanley/John A UR Totem’s will start Falling” (see photo). As well, the word “conquered” was painted on a highway sign containing shíshálh language. The RCMP have been contacted and are investigating, according to a press release by shíshálh Nation.

“Our Nation members are saddened and upset by these most recent acts of racism,” said hiwus (Chief) Warren Paull. “Of course, we are not surprised. Racism exists here on the Sunshine Coast, as it does elsewhere. And as always, racism will be confronted for what it is – as an expression of ignorance and hate that must be completely rejected in all forms.”

Since news of these racist incidents began circulating, shíshálh Nation has received an outpouring of support from neighbours, residents, and others across British Columbia. “This is the most heartening thing,” said Councillor Selina August. “While we woke up today to hurtful news of racist incidents, we are also met with the love, support, and generosity of British Columbians from all walks of life who wish to see true reconciliation become the reality across this country. So our message today is one of thanks, to all those countless British Columbians who see racism for what it is, call it out, and are ready to do the on-going work of improving our communities, province, country, and world.”

Nicholas Simons, MLA for Powell River – Sunshine Coast added: ” I join the shíshálh Nation in condemning these hurtful, racist incidents. There is no excuse for such hateful thoughts, and no place for words, or actions like this on the Sunshine Coast or anywhere. Residents of the Sunshine Coast reject racism and overwhelmingly support the work that individuals, communities, and British Columbians are doing to build greater understanding, inclusiveness, and equality – including the essential work of reconciliation.”

Canada Dental Benefit for children under 12 who don’t have access...