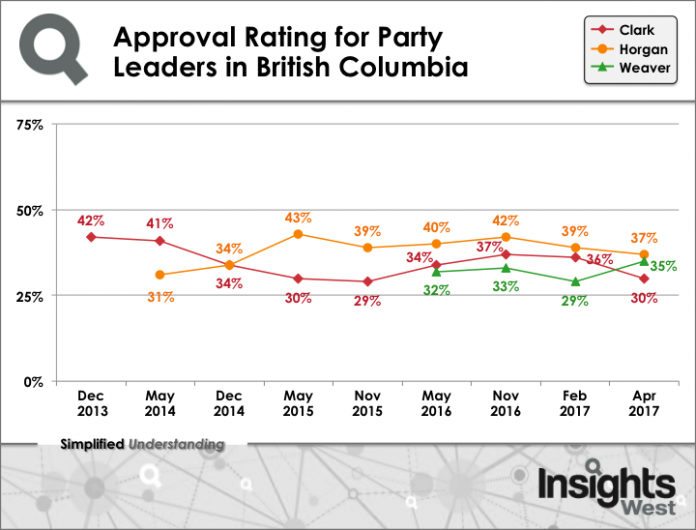 In the online survey of a representative sample of British Columbians, the approval rating for Clark has dropped to 30% (down six points since an Insights West survey conducted in February).

Opposition and BC New Democratic Party leader John Horgan is at 37% (-2).

Weaver posts a momentum score of +4 (12% say their opinion of the BC Green leader has improved over the past three months, while 8% say it has worsened).

Horgan is even, and Clark stands at -39, with 44% saying their opinion of her has worsened.

More than a third of British Columbians (37%) say they would be “very upset” if the BC NDP forms the government again in the province, including 48% of those aged 55 and over.

Conversely, a majority of residents (53%) say they would be “very upset” if the BC Liberals remain in power, including 57% of those aged 18-to-34.

Almost two thirds of British Columbians (64%) believe it is time for a change of government in the province, including 33% of those who voted for the BC Liberals in 2013.

TWO-IN-FIVE British Columbians (41%) are undecided when asked which one of the three party leaders would make the best head of government. Clark holds a three-point edge over Horgan (25% to 22%), with Weaver at 12%.

Clark is ahead on dealing with the economy and jobs (38%) and energy and pipelines (29%).

Weaver leads on the environment (45%).

Clark and Horgan are virtually tied on crime and public safety (25% to 24%).

The BC NDP leader is also regarded as sharing the views of most British Columbians on child care (35%), seniors care (31%), fundraising for political parties (26%) and helping residents become homeowners (also 26%).

Clark is the preferred choice for creating jobs (32%), managing the province’s finances (29%) and transportation projects (25%).

“While most British Columbians cannot currently select their ideal premier, they definitely have opinions about the abilities of leaders to deal with specific issues,” says Mario Canseco, Vice President, Public Affairs, at Insights West. “Premier Clark is still regarded as a superior economic manager, while opposition leader Horgan is connecting on themes like housing, education and care.”

The two main parties hold on to most of their support from the 2013 provincial ballot (81% for the BC Liberals, 84% for the BC NDP). While at least two thirds of those who intend to vote for the BC Liberals (69%) or the BC NDP (66%) say they will not change their minds before election day on May 9, only 52% of BC Green Party voters are fully committed to the party at this stage.

Among British Columbians who voted for the Liberal Party in the 2015 Canadian federal election, 49% are currently supporting the BC Liberals, while 34% are backing the BC NDP.

The main factor motivating voters of all three major parties is ideas and policies (46% for BC Liberal voters, 35% for BC NDP voters and 58% for BC Green voters). The second motivator sees some drastic changes, with 30% of BC Liberal voters mentioning a desire for stability, 30% of BC NDP voters outlining a desire for change, and 22% of Green voters expressing disgust with other contending candidates.