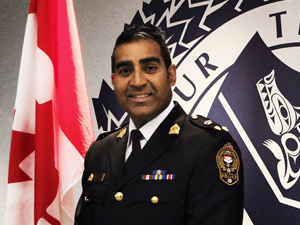 THE Victoria and Esquimalt Police Board on Tuesday announced that it has appointed Del Manak as Chief Constable of the Victoria Police Department.

Manak has led the department as Acting Chief since December 2015.  He will officially assume the rank of Chief Constable on July 1.

“Acting Chief Manak has demonstrated unwavering leadership and established a strong community presence for the past year and a half through a number of challenging circumstances,” said Victoria Mayor Lisa Helps, Lead Co-Chair of the Police Board. “His customer service and community engagement philosophy has been embraced by our communities.  The board has determined that he has what it takes to permanently lead as Chief Constable.”

The board did not hold an internal or external competition but rather reviewed Manak’s performance through a 360-review process to assess his performance as Acting Chief. Through the process, and his year and a half in the Acting role, the board determined that he is the right person for the job.

“From his promotion to Deputy, to Acting and now to Chief, Del Manak has worked to ensure both communities are served well by Victoria Police Department. It is fitting that he continue to lead the department and provide excellence in policing through the framework agreement to both the Township of Esquimalt and the City of Victoria,” said Esquimalt Mayor Barb Desjardins.

Manak stated, “It is a tremendous honour to lead the committed officers and staff of this organization.  Having been born and raised in Victoria, I know firsthand the long and proud history of VicPD’s  service to its communities.  I plan on building on this strong reputation through further engagement and collaboration.”

This is the first time since 1991 (26 years) that a police chief has been appointed from within the Victoria Police Department and only the second time in the past 60 years.  The Board said it is pleased to hire from within and is looking forward to Manak implementing a succession plan that ensures the development and growth of more future leaders for the organization.

Details of the Chief’s contract will soon be available on the Victoria Police Department website.

BORN and raised in Victoria, Manak started his policing career with four years of service with the Vancouver Police Department. He came to VicPD in 1993, where he has spent the last 23 years in a variety of sections and roles, according to the police website.

Manak has an extensive traffic safety background. He spent five years in the VicPD Traffic section, where he was a collision analyst and part of the escort and drill team. Selected to set up a provincial government pilot project, Manak helped create the Integrated Road Safety Unit (IRSU) in the Capital Regional District. The success of this pilot program led to the expansion of other IRSU units throughout the province.

Promoted to the rank of Inspector in 2006, Manak served as the Officer In Charge of Human Resources for over three years.  He has personally hired more than 60 officers, or nearly one quarter of VicPD’s current members.  He then oversaw the Patrol Division until he was promoted to Deputy Chief Constable in June 2010.

Manak is a graduate of the Dalhousie University Police Leadership Program and the FBI’s National Academy Program.

Remaining active in the community remains important to Manak.  He is involved in coaching baseball, hockey and soccer and has proudly coached over 30 teams through the years.

ACCORDING to viccity.ca, (when Manak was selected as deputy chief in 2010), he attended George Jay and Central Middle inner-city schools before graduating from Mount Douglas Senior Secondary.

It said: “He started out his working career delivering the Daily Colonist, working up to sub-manager, before spending seven years at Canadian Tire. He also volunteered numerous hours at the Fairfield community police station and the youth detention centre, while trying to break into policing.”

But it was tough getting into policing with departments hiring only one or two officers a year. So he eventually joined Vancouver Police in 1990.

The report said: “He switched to the Victoria department in 1993 after his father died.”

Manak said: “My mom asked if I would move back. I’m of Indo-Canadian descent and East Indian families are fairly tight. So it was just the right decision.”