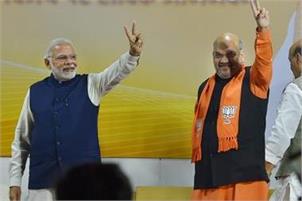 Congress improved its tally in Modi’s home state of Gujarat

Ahmedabad / Shimla, Dec 18 (PTI): The BJP won the Gujarat assembly polls for a record sixth straight victory on Monday, and was set to evict the Congress in Himachal Pradesh, tightening the party’s grip over the country’s politics with general elections only 18 months away.

The Gujarat results turned out to be a seesaw, with BJP and Congress running neck and neck in the morning. At midday, BJP pulled ahead, and by 6.30 p.m., it had won 95 seats while leading in four seats in the 182-member assembly.

The result – with a likely final tally of 99 seats for BJP – was not as grand as the saffron party had expected. Party leaders had aimed for 150-plus seats, but faced a tough challenge from a resurgent Congress led by Rahul Gandhi, as well as young Patidar and Dalit leaders Hardik Patel, Alpesh Thakor and Jignesh Mewani.

The Congress won 75 seats and was leading in two for a possible total of 77, compared to 61 in the 2012 elections.

“This is double joy for me,” said Prime Minister Narendra Modi, a former Gujarat chief minister, in a victory speech at the BJP headquarters in New Delhi.

He said he was happy that his successors continued the development work which he had spearheaded during his nearly 13-year tenure as the chief minister.

“I once again offer the hardworking party workers many congratulations. This is not an ordignary victory,” he said.

In an earlier tweet, Modi said: “I assure (people of Gujarat and Himachal Pradesh) that we will leave no stone unturned in furthering the development journey of these states and serve the people tirelessly.”

Gandhi in a tweet said his party “accepts the verdict of the people and congratulates the new governments in both states.”

He thanked his party members for fighting “anger with dignity.”

The BJP called the results a vote for development pushed by Modi, who was the tireless star campaigner in both states.

The Congress took solace in the fact that it bettered its tally in Gujarat, the home turf of Modi and BJP chief Amit Shah.

Still, it was clear that another Congress-ruled state has slipped from its grasp into BJP control. It now rules only Karnataka and Punjab among the major states, besides Puducherry, Meghalaya and Mizoram. Karnataka elections are due next year.

“We have set a record in the history of the BJP by winning consecutive assembly polls… Anti-incumbency is not working there. The prime minister’s popularity is intact. Amit Shah’s strategy has worked,” BJP vice president Shyam Jaju said.

As the victories became clear, party workers gathered in the streets and headquarters, distributing sweets and bursting firecrackers.

The BJP’s dip this time was touted by the Congress as a reflection of Rahul Gandhi’s efforts during the campaign, when he appeared to have improved his stature as a politician.

“The Congress’ tally has gone up there, while the BJP’s numbers have fallen. This is the start of Rahul Gandhi’s political story,” senior Congress leader Kamal Nath told reporters outside Parliament.

The BJP said what matters is the victory.

“Jo jeeta wohi Sikandar (whoever wins is the king),” said Union minister Smriti Irani, when asked if the Congress gave it a tough fight.

In Himachal Pradesh, the BJP won 32 seats and was ahead in 12 seats, which means it could end up close to a two-thirds majority in the 68-member house. The ruling Congress won 17 and was ahead in four. In the outgoing house, Congress had 36 seats, and BJP 26.

However, Prem Kumar Dhumal, BJP’s chief ministerial candidate in Himachal Pradesh, lost to Congress’s Rajinder Rana in Sujanpur, after he changed his traditional constituency of Hamirpur. He was made the CM face only nine days before the pollling.

The December 9 and 14 elections took place in the backdrop of GST and demonetisation, which the opposition had claimed would inflict a huge dent in Modi’s popularity.

Modi and Shah campaigned vigorously, crisscrossing the state to hold scores of rallies in what appeared to be a dry run for the next Lok Sabha elections, which should be held before May 2019.

The victories establish not only the BJP’s supremacy but also Modi’s apparent invincibility. Yet, it also made Gandhi, who recently assumed Congress presidentiship, a serious challenger as he appeared more confident in taking on the BJP stalwarts.

Mehsana was the epicentre of the Patidar reservation agitation.

The BJP has won every election in Gujarat since 1995.

However, it was out of power for a couple of years due to party infighting and rebellion by Shankersinh Vaghela. BJP came back to power in 1998, and has ruled uninterrupted since then.

Himachal Pradesh has a tradition of changing the government in every election.