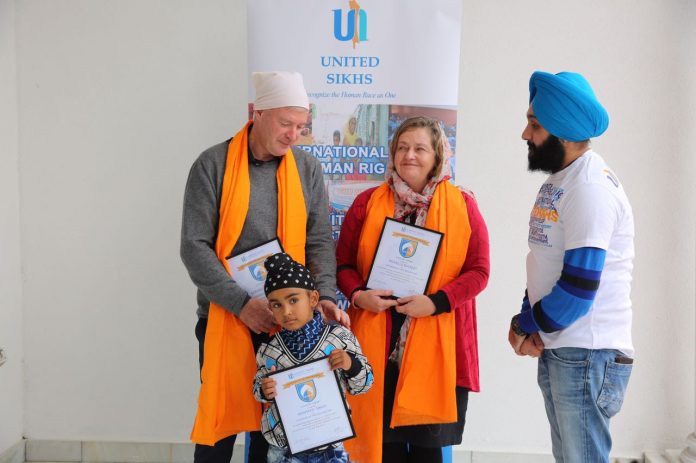 “When I reached my son’s school, I saw the principal and a teacher watching a YouTube video whilst trying to re-tie my son’s patka, which had come off. My heart melted to see so much love for the Sikh turban” – Amarpreet Singh, whose 5-year-old son studies at a Christian school in a Melbourne suburb.

MELBOURNE (Australia): United Sikhs organization and the Sri Guru Singh Sabha Gurdwara Craigeburn honoured on Sunday the principal and a teacher from the Mother of God Christian school in the Ardeer suburb of Melbourne. They were honoured for showing their Christian spirit on March 24 when they re-tied five-year-old Mansage Singh’s patka, a head wear worn by Sikh children.

This was in sharp contrast to the experience of another five-year-old Sikh student, Sidhak Singh, who was refused admission last year by the Melton Christian College of Melbourne, because he wore a patka. Sidhak Singh’s father, Sagardeep Singh, has filed a complaint, with the Human Rights Division of the Victoria Civil and Administrative Tribunal (VCAT), which is listed for a three-day hearing from July 24. United Sikhs has arranged for legal representation for Sagardeep Singh through the prestigious international law firm of Herbert Smith Freehills LLP. You may read about the patka ban faced by Sidhak Singh here.
“Hello Amar, I am sorry that your son’s turban came off this morning. I did my best re-tying it back by watching many YouTube videos but am missing on the finishing touch. I am just wondering if you can come and tie his turban accordingly. We are really sorry. The boy who took his turban off is autistic. We explained to him why he must not touch the turban again, but he did it by accident,” the principal of the Mother of God School said in a telephone call to Mansage Singh’s father, Amapreet Singh.

The school principal, Gerard Broadfoot, and teacher, Michelle Buckley, received a siropa, a cloth of honour, from the gurdwara in a ceremony on Sunday. They also received a ‘Defender of the Sikh Dastaar’ award from United Sikhs. Mansage Singh was also honoured by United Sikhs and the gurdwara for helping his principal and teacher to re-tie his patka.

“What we did at school with Mansage was to look after him and make him feel safe. We look after each other. We are very honoured to be given this award today,” said Broadfoot.

“I feel very humbled to be here in front of so many people for doing such a small thing. It is something we would do every day with all the children to provide them with respect and care because we are a Catholic school for all people,” said Buckley.

“Sikhs are often in the news for turban removal or discrimination but this school principal and teacher has set an example and showed that humanity is alive, when they re-tied a Sikh student’s patka. The Australian Sikh community is very honoured by their action,” said Gurdeep Singh, President of the Craigeburn Gurdwara, one of the largest gurdwaras in Melbourne.
“The Mother of God School has set the standard for all schools to follow and shown that a child’s education at a school should not be at the expense of a right to practice his or her faith,” said Gurvinder Singh, United Sikhs Director, Melbourne.

“We are very humbled and very proud to know that our son is being educated in a school that respects the beliefs of every culture and religion and it takes care to protect the belief of all students,” said Amarpreet Singh.

“All the school kids have to wear sun hats when they go outside to play but since my son ties a patka he was given an option to not wear the hat. The principal asked our permission for the school logo to be printed on Mansage’s patka,” he added.