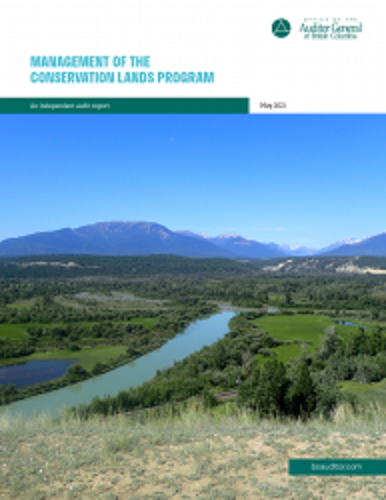 THE Office of the Auditor General of BC that released a new audit report, Management of the Conservation Lands Program, on Tuesday said that overall, the audit concluded that the ministry has not effectively managed the program.

The audit examined whether the Ministry of Forests, Lands, Natural Resource Operations and Rural Development has effectively managed the Conservation Lands Program to conserve important habitats for significant fish and wildlife species, such as species at risk and migratory birds.

“We found the program lacked strategic direction, and most plans for wildlife management areas were not current or approved,” said Auditor General Michael Pickup. “We also noted that regional staff had limited strategies to resolve the unauthorized use of conservation lands and hadn’t assessed which lands were most at risk from this use. We found that between 2009 and 2020, hundreds of unauthorized activities had occurred on conservation lands.”

Additionally, the inventory of conservation lands was inaccurate, and the ministry had not monitored or reported publicly on the effectiveness of the program.

The report contains 11 recommendations mainly focused on providing strategic direction, revising outdated management plans for wildlife management areas, resolving threats to the most at-risk conservation lands, improving tracking of inventory, and monitoring and reporting publicly on the effectiveness of the program.

British Columbia has the greatest diversity of native fish and wildlife in Canada and the Conservation Lands Program contributes to government’s strategy to maintain this diversity. The program aims to conserve and manage important habitat for significant fish and wildlife species. Habitats conserved through the program include some of the most biologically productive estuaries, wetlands and grasslands in the province.

The program is also responsible for the conservation of wildlife management areas, which include internationally recognized wetlands, important migratory bird habitat and habitat for many species at risk.

Weaknesses and gaps in expense policy framework for offices of speaker, clerk and sergeant-at-arms