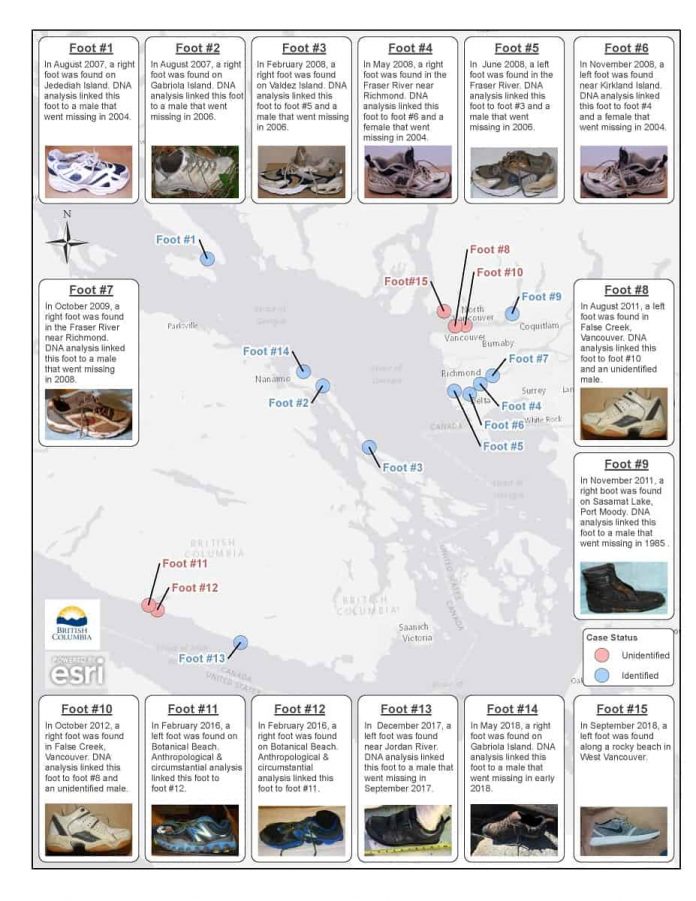 15th human foot found on BC shorelines since August 2007

THE BC Coroners Service is looking for the public’s assistance in helping to identify a foot that was found inside a shoe along the shoreline at the 30th Street beach access (south of Marine Drive and 30th Street) in West Vancouver in September 2018.

After conducting tests, including a DNA analysis, in an attempt to determine the identity of the deceased, a match was not found with any of the profiles on file for missing persons. However, DNA evidence does show the foot is that of a male.

The BC Coroners Service is asking for any information people may have related to the shoe or to whom it may have belonged.

The decedent was wearing a light grey Nike Free RN shoe with a black Nike swoosh logo and white base, white laces and a blue sock. The shoe was a men’s U.S. size 9.5 with an OrthoLite insert. The shoe was manufactured between Feb. 1 and April 17, 2017, and appeared to be in relatively new condition.

Based on the bone structure of the foot, the coroners service’s identification specialist believes the age at death is under 50.

This is the 15th human foot found on British Columbia shorelines since August 2007. Ten of these feet have been matched to missing persons, while five remain unidentified.

To view an updated infographic of feet found in B.C., visit: https://news.gov.bc.ca/files/UHRFootMap2019_01.jpg

No increase in suicide deaths during pandemic