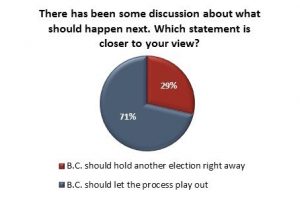 EVEN as Premier Christy Clark keeps on desperately and shamelessly clinging on to power, 62 per cent of British Columbians, including 32 per cent of her own base want her to step down as leader of the BC Liberals, an Angus Reid poll released on Tuesday has found.

The poll also found that 71 per cent of British Columbians do not want a snap election. That puts Clark and her Liberals in a disadvantageous position should the Premier who seems hell-bent on playing dirty politics decides to take a gamble.

Almost two-thirds of British Columbians (63%) say that BC Liberals should concede defeat, rather than use procedures to prevent a Green-supported NDP minority government from leading.

The poll found that while past BC Liberal voters find a common voice on several pressing issues including the fate of the Site C Dam and the twinning of the TransMountain Pipeline, they are less united on what to do about the possible changes to the approval process for LNG projects.

It also found that while majorities of the BC Liberal base strongly support continuing with the Site C Dam and the TransMountain Pipeline expansion (72% and 73% respectively) – there is less alignment between NDP and Green voters and indeed, in their own camps, on the future of these projects.

And while those who voted NDP or for the Greens of BC last month are adamant an NDP minority government is what they want, Green supporters are less warm towards NDP leader John Horgan than NDP supporters are of Green leader Andrew Weaver.

More than one-in-three British Columbians worry their own standard of living will be worse a year from now – a seven-year high.

About one-in-ten (11%) indicate they’re experiencing buyer’s remorse – and would have voted differently if afforded a “do-over”; of that group, slightly more are for the Liberals than the NDP.

AT approximately 11:35 p.m. on Thursday, Richmond RCMP responded to a report of shots fired at a gas station near the intersection...
Read more