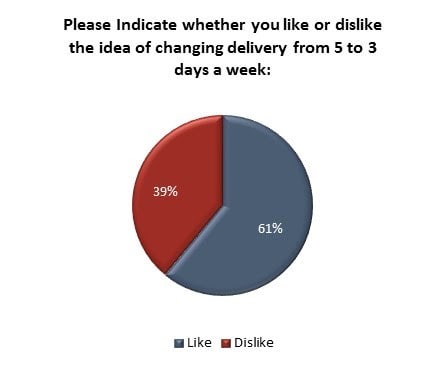 WITH a decision on the future of Canada Post promised for sometime “this spring,” a new public opinion poll from the Angus Reid Institute finds Canadians still largely opposed to eliminating door-to-door mail delivery in urban areas, but open to a reduction in the number of days per week mail is delivered.

Initiated by the previous government of Stephen Harper and put on hold at the beginning of Justin Trudeau’s mandate, the switch from door-to-door delivery to community mailboxes has the support of fewer than two-in-five Canadians (37%). More than half (54%) oppose the change. These views are essentially unchanged since Angus Reid first asked about this issue in 2013.

Even though more than three quarters of Canadians (77%) say, “Canada Post is an essential service and should maintain its current service levels”, three-in-five (61%) like the idea of changing mail delivery from five days a week to three.

* While the privatization of Canada Post has been debated in recent years, Canadians oppose the idea at a rate of more than two-to-one (63% – 24%)

* More than half of Canadians (54%) are against eliminating door-to-door mail delivery in urban areas, while almost two-in-five like the idea (37%)