THE Liberal government made its latest gun policy announcement last week, creating “more stringent rules” to track the sale or transfer of non-restricted guns, a move that comes as Canadians express concerns that gun violence has been increasing domestically.

New data from the non-profit Angus Reid Institute canvassing the views of 5,000 Canadians, including large samples in urban centres, reflect these perceptions.

Overall, three-in-five (60%) say gun violence is rising in their province, with Quebecers (75%) and Ontarians (66%) most likely to perceive this to be the case.

Further, two-in-five (43%) say gun violence is increasing in their own community. Those in urban areas are considerably more likely to say this (46%) when compared with Canadians living in rural parts of the country (29%) and residents in Montreal (65%), Halifax (56%), and Toronto (54% in 416 area code, 57% in 905 area code) are most likely to note that their communities have become more violent. Official data from Statistics Canada confirms that firearm offences have, indeed, become more common over the past decade.

Gun control advocates recently sent a letter to Minister of Public Safety Marco Mendicino asking him and the federal government to ban handguns with consistent national policy and avoid creating a “disastrous patchwork” by offloading this decision to the provinces, as has been done thus far. Asked for their own views on this, Canadians lean heavily toward federal regulation rather than leaving it up to provinces to decide (66% do).

Saskatchewan (41%) and Alberta (34%) residents are most likely to support provincial rights on this issue, but in each case more respondents still say national policy would be best. 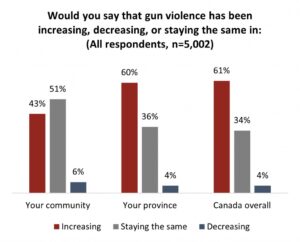