A new study from the non-profit Angus Reid Institute finds Canadians mostly supportive of the fashion with which their government has responded and sought to support Ukraine, while many say they are doing their own bit to help.

Indeed, one-quarter of Canadians (27%) say they have donated money to support efforts to help Ukrainians since the war began in late February. Those over the age of 54 are most likely to be following the conflict and to have opened up their wallets. On the more symbolic side of this scale, nearly the same number (28%) have posted something in support on social media. A handful of Canadians (3%) say they have sponsored or supported a Ukrainian refugee or refugee family.

At the governmental level, where policy decisions can wield much more considerable influence, Canadians are largely supportive of efforts made to this point. Hundreds of millions of dollars have been offered in both weaponry and financial assistance, in addition to sanctions targeting Russian oligarchs and businesses. Three-in-five (61%) say they approve of the way the government has responded, while 22 per cent disapprove and 17 per cent are unsure. Notably, vast majorities of past Liberal and NDP voters are joined by half (47%) of past Conservative voters in praising the government’s approach to the crisis.

That said, many say Canada should do more. Ukrainian officials have requested more weaponry and support in recent weeks, while others say the Canadian government has been slow to commit to offering much needed heavy weapons. Two-in-five (38%) say this country has not done enough, the same number who say it has offered about the right level of assistance. 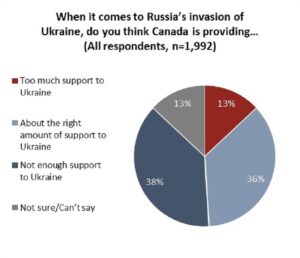 Pandemic fatigue: 36% of Canadians struggling with mental health; 23% are ‘depressed’

Majority of Canadians and Americans say riot at U.S. Capitol was ‘domestic terrorism’