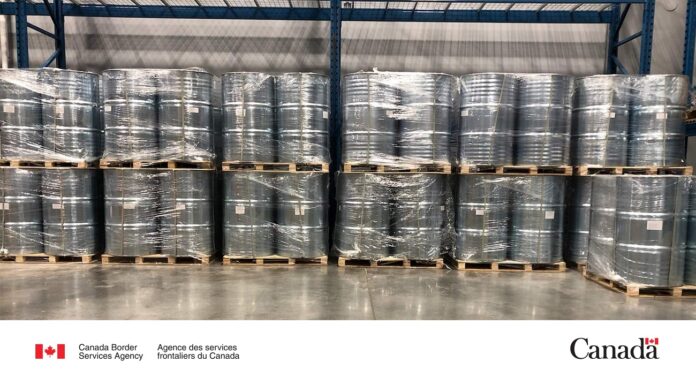 ON February 8, the Pacific Region Intelligence Section of the Canada Border Services Agency (CBSA), with assistance from the National Targeting Centre, identified a container of interest, and referred it for examination.

CBSA officers from Metro Vancouver Marine Operations examined the container using a wide range of detection tools and technology, and collected samples from multiple drums. These samples were sent to the CBSA’s Contraband Drug Analysis Section in Ottawa.

The analysis confirmed that the substance was gamma-butyrolactone, a controlled substance also known as ‘GBL’. GBL is a Class A Precursor in Part 1 of Schedule VI of the Controlled Drug and Substances Act, that is essential to the production of other controlled substances, such as “date rape” drugs. In total, the CBSA seized 17,852.5 litres of GBL with an estimated street value of over $1.8 million.

The investigation into the importers is ongoing.

J.J. Chayeski, Director, Metro Vancouver Operations Division, Pacific Region, CBSA, said: “Through an effective and successful investigation, border services officers and intelligence personnel prevented the potential manufacture of thousands of kilograms of illegal drugs. This significant seizure illustrates the CBSA’s commitment and vigilance to protecting our communities from harmful drugs and substances by impeding the ability of criminals to operate across our borders.”