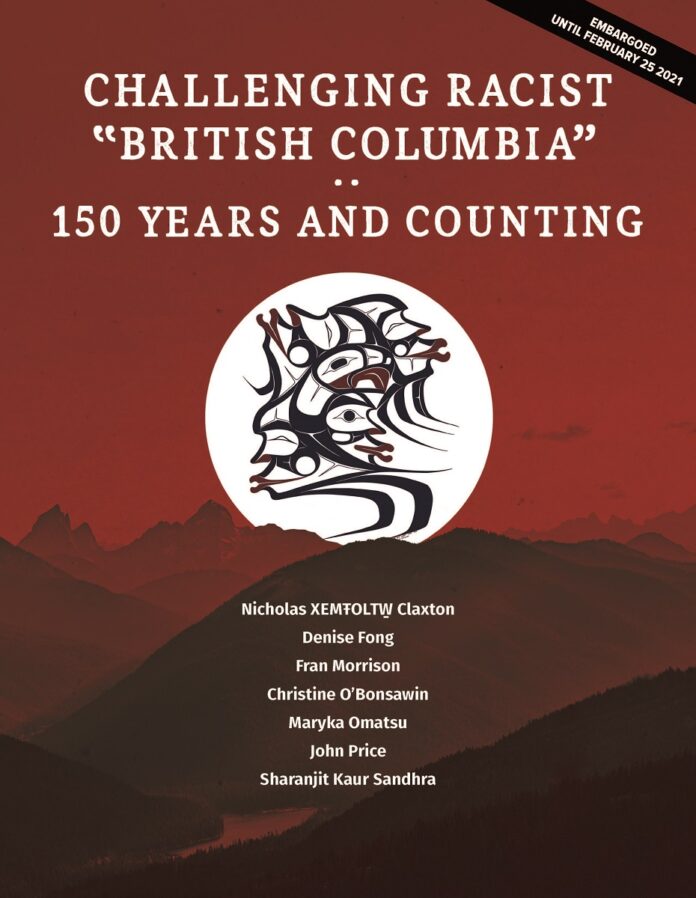 THE 150th anniversary of British Columbia joining Canada arrives at a time when people and institutions are being asked to reckon with the foundational impacts of racism in our society. Challenging Racist British Columbia: 150 Years and Counting, is a new publication examining the long history of racist policies that have impacted Indigenous, Black and racialized communities in the province over those 150 years, tying those histories to present day anti-racist movements.

Co-authored by Nicholas XEMŦOLTW̱ Claxton, Denise Fong, Fran Morrison, Christine O’Bonsawin, Maryka Omatsu, John Price and Sharanjit Kaur Sandhra, the 80-page, illustrated booklet is being released in advance of the 150th anniversary, which is on July 20, 2021. This engaging resource has been designed to assist anti-racist educators, teachers, scholars, policymakers and individuals doing anti-racism work to help pierce the silences that too often have let racism grow in our communities, corporations and governments.

The booklet’s publication comes at the end of Black History Month and amidst ongoing necessary conversations about anti-racism in our province. Sylvia Mangue Alene, President of the BC Black History Awareness Society says of the resource, “challenge starts by asking yourself what needs to be challenged. In this booklet subjects have answered in a very clear way what needs to be challenged and that is racism, racism is challenged because we believe that there are better ways to treat people and that is with respect and inclusiveness in all aspects that life has to offer.”

The resource documents how current cycles of activism — from local actions in the Black Lives Matter movement, to the Wet’suwet’en hereditary chiefs continuing to assert title over their traditional territories, to the Japanese Canadian Community’s current negotiations with the BC government for redress for the province’s role in the ethnic cleansing and dispossession of the community, as well as ongoing community responses to anti-Asian racism that has been heightened during the COVID-19 pandemic — are all a part of a broader story of Indigenous, Black and racialized communities challenging white supremacy on these lands. The material covers different stories from 1871, when BC joined Canada, to the present.

This resource will be available as a free pdf download on the project website www.challengeracistbc.ca beginning on February 25. An enhanced, interactive digital edition, providing direct access to primary and community-based sources, and a 20-minute video will follow this spring.

The booklet is co-published by the UVIC History project Asian Canadians on Vancouver Island: Race, Indigeneity and the Transpacific and the Canadian Centre for Policy Alternatives, BC Office. The cover was designed by John Endo Greenaway, using the work titled Flight through the Four Winds by Sanford Williams.

Nicholas XEMŦOLTW̱ Claxton says: “For the Indigenous peoples in BC, the struggles have always been about the Land, and recognition as the rightful owners.”

Denise Fong says: “What actions do we need to take to work towards reconciliation and building stronger communities? This educational resource is a starting point for students and educators to engage in inquiry about the historical context of racism in British Columbia and to recognize the collective efforts of Indigenous, Black, and People of Color (IBPOC) community activists in fighting against injustices.”

Fran Morrison says: “In publishing this inclusive cross-cultural history of the fight against racism, it’s value is peerless in that the cultures/communities in this resource came together to produce this resource. It is a collective, resounding call to policy makers and governments to end racist policies and practices that have impacted and continue to impact Indigenous, Black and racialized communities in our province.”

Christine O’Bonsawin says: “In bringing to light the histories and experiences of Black, Indigenous, and racialized people, this resource is our effort to provide a truthful account of the history of ‘British Columbia’. Challenging Racist ‘British Columbia’ further underscores the critical work ahead for all of us who support Indigenous land defence and a growing anti-racist movement.”

Maryka Omatsu, National Association of Japanese Canadians, Executive Board Member, says: “The Japanese Canadian community continues to struggle for justice and redress. Japanese Canadians want to ensure that our experience will not be repeated and that racial bigotry will never again be used to target and harm another community.”

John Price says: “This resource honours the activists and communities that have been fighting racism for 150 years and, as the current anti-racist uprising demonstrates, are still having to stand up to system racism on a daily basis. Hopefully it serves as a wake-up call to governments that no longer should they engage in divide-and-rule policies. 150 years is long enough.”

Sharanjit Kaur Sandhra says: “This book offers a bold, honest, historical correction to the false narrative that Canada is exempt from white supremacy and racist nation state formations. And for that reason, this book is the exact resource needed in this pivotal moment where an anti-racist movement continues to take shape. It is a resource for activists, students, educators, community professionals — it is a resource for all.”