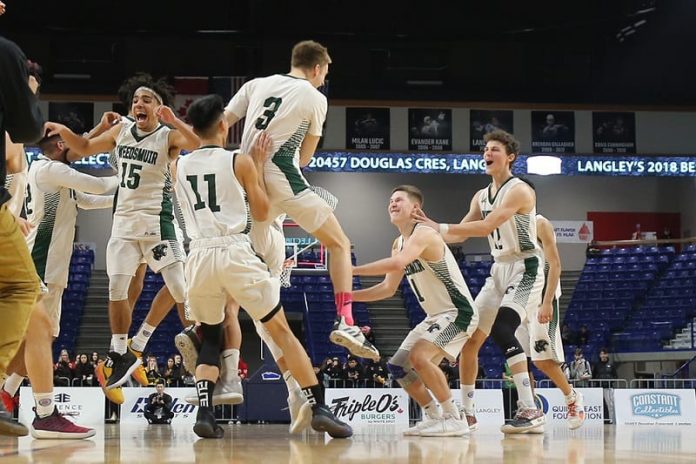 THE championship finals are all set and if Friday’s semifinals are any indication, basketball fans are in for a treat on Saturday night after six of the eight games were decided by 12 points or less, including a double-overtime thriller and another which was decided in the dying seconds.

All four tiers of the BC High School Boys Basketball Championships will conclude on Saturday at Langley Events Centre as four days of basketball action wrap up.

A Langley team will be going for gold in their hometown as the No. 4 Credo Christian Kodiaks get set to face the No. 2 Kelowna Christian Knights in the 1A Tournament championship game.

The Kodiaks have never won the provincial title while the Knights have five in their trophy case, most in tournament history.

The 2A Tournament is the lone of the four to see the top-seed advance as Prince Rupert’s Charles Hays Rainmakers are set to battle Lake Country’s George Elliot Coyotes, the No. 7 seed. The Coyotes won the title back in 1991 while the Rainmakers have never claimed the 2A trophy.

The 3A Tournament final will put the No. 9 North Delta Huskies – who have already knocked off the No. 8, the No. 1 and the No. 4 seeds – against the No. 2 Vernon Panthers. Both teams are in search of the first championship in their respective histories.

And one night after knocking off the No. 1 seed, Surrey’s Lord Tweedsmuir Panthers eliminated the defending 4A champion Burnaby South Rebels, setting up a showdown with the No. 7 Kelowna Owls.

The Owls have one 4A championship while Lord Tweedsmuir is in search of their first.

It took an extra 10 minutes and each team lost five players to fouling out, but in the end, Langley’s Credo Christian Kodiaks outlasted top seed Glenlyon Norfolk of Victoria 97-88.

Credo Christian took advantage of their opportunities from the charity stripe, sinking 37 free throws to their opponent’s 22.

Chris Graham had his third-straight 30-plus point game netting 39 points and 19 rebounds in a losing effort.

A 19-9 third-quarter advantage helped Kelowna Christian rally to top Chilliwack’s Highroad Academy in a battle of the Knights.

The game featured a dozen lead changes and was also tied on eight other occasions.

Jake Sabbagh led Kelowna Christian with 18 points and Indy Hallett had 16, including a trio of three-pointers in the final moments to put his team ahead to stay.

The Victoria squad struggled from the field, hitting 20.5 per cent from the field and just 13.3 (4-for-30) from the three-point line. By comparison, the Coyotes shot 36.4 per cent, including hitting 13 of 38 from beyond the arc.

Nic Lafontaine led all scorers with 26 points while Carter McConnell had 16 and Triston Hearn 13 points.

The Charles Hays Rainmakers (Prince Rupert) withstood a resilient Sa-Hali Sabres squad as the No. 12 seeded Kamloops squad briefly held a two-point lead late in the third quarter before the top seed re-established control to win 74-66.

After a close opening 10 minutes, the Vernon Panthers continued to get stronger as the game wore on as they hammered Richmond’s R.A. MacNeill Ravens 89-65.

The teams were separated by just a point following one quarter, but the Okanagan champions wore down the Ravens, outscoring them by 23 points the rest of the way.

Vernon doubled the Ravens with points in the paint, 52-26, as well as winning the rebounding battle 46-36. The Panthers also connected on nearly 44 per cent of their field goals.

Suraj Gahir banked home a three-pointer in the dying seconds as the North Delta Huskies pulled off a third-straight upset as they knocked off Prince George’s Duchess Park Condors 62-61.

The game was back-and-forth with the Condors leading for nearly 19 minutes, the Huskies for just over 10 minutes and the score tied for the remaining 10 minutes and change.

Gahir led the Huskies with 28 points and 15 rebounds, while also delivering three blocked shots and another three steals. Caleb Lyons led the Condors with 16 points.

The Panthers used a 49-31 rebounding advantage as well as outscoring the Rebels 19-4 on second-chance opportunities.

Elijah Devison had 15 points and he was one of three Lord Tweedsmuir players (along with Samra and Jackson Corneil) to finish with 11 rebounds.

Baltej Sohal led the Rebels with 16 points while Justin Sunga had 14.

Parker Johnstone fueled the Kelowna offence with 37 points while Hunter Simson and Malcolm Gregor had 17 and 15 points, respectively.

The Ravens were led by Cameron Slaymaker’s 18 points and David Chien’s double-double of 13 points and 13 rebounds.