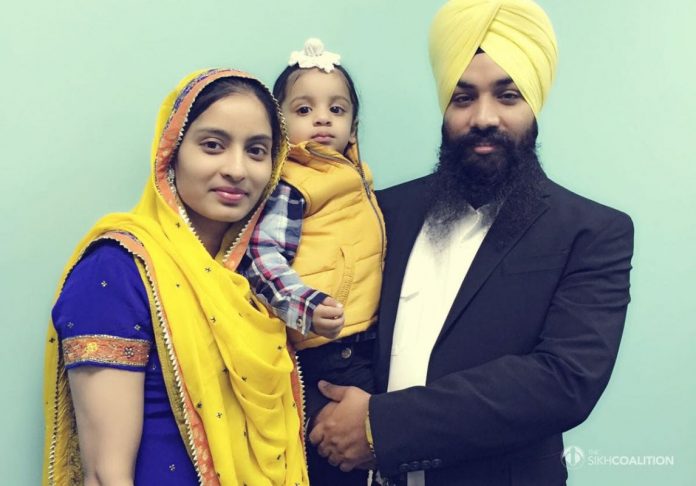 Quad Cities, Illinois: A passenger put a gun to the head of a Sikh Uber driver after demanding to know “which country do you belong to?” and telling him “I hate turban people” on Sunday, January 28. After three weeks of advocacy, the Rock Island County State’s Attorney announced on February 16 that his office has a conflict of interest in the case and must refer it to the Illinois State’s Attorney Appellate Prosecutor’s Office in Springfield, Illinois.
“We refuse to hypothesize about what the conflict of interest inside the Rock Island County State’s Attorney’s Office is, but it’s fair for all of us to wonder why this very straightforward hate crime case has dragged on for three weeks without an arrest and hate crime charges,” said Sikh Coalition Legal Director Amrith Kaur. “We will continue working with Gurjeet Singh and the local sangat to ensure justice in this case.”
Gurjeet Singh, a father and husband who wears the Sikh turban and beard, has lived in Northwest Illinois for the last three years and serves as the head granthi (religious community leader) at his local gurdwara (Sikh house of worship). Singh faced the assailant while driving for Uber and then notified police the next day about the clear bias-based assault. After vigorous advocacy, which included legal, policy, communications and grassroots engagement, no charges have been brought and no arrest has been made.
“In a textbook hate crime case, Gurjeet Singh’s attacker pointed a gun at his head and violently threatened him with racist, xenophobic language that targeted his Sikh articles of faith,” said Amrith Kaur. “Hate crimes affect not just individuals, but entire communities, and we cannot combat hate without acknowledging it and addressing it head on.”
The Sikh Coalition has connected with the Illinois State’s Attorney Appellate Prosecutor’s Office in Springfield that is awaiting the case file from the Rock Island County State’s Attorney’s Office, and will continue to work with the appropriate authorities as it seeks justice in Singh’s case. A decision on what charges to file will be forthcoming, and the Sikh Coalition remains ready to respond. For now, it encourages concerned community members not to contact the Springfield office because they are still waiting to receive the case file and are in contact with it.
The Sikh Coalition says: “This assault follows a pattern of bigotry impacting Sikhs and other minority communities across America. The FBI has documented a sharp increase in hate crimes, and this incident underscores the need to further amplify efforts to prevent and combat hate as we work for better hate crime data, stronger hate crime laws, and increased education. We continue to provide free legal aid to Sikhs who have been discriminated against or have suffered bias. Relatedly, our Gurdwara Security Initiative provides free resources to help Sikh houses of worship minimize the risk of attacks. Finally, we have a variety of free educational resources, including community brochures and know your rights materials.”

“The work that the Sikh Coalition has done in response to this hate crime has been remarkable,” said local Sikh community leader Gurlabh Singh. “Their presence in the Quad Cities has made a lasting impact and the local community remains resolute in achieving justice for Gurjeet and working closely with the Sikh Coalition moving forward.”