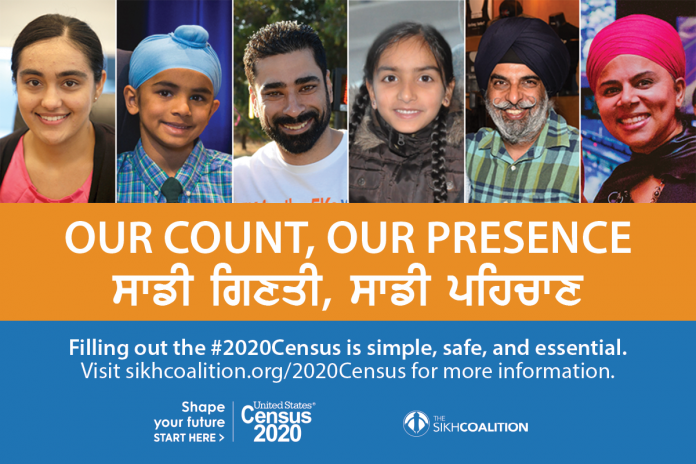 THE Sikh Coalition announced on Monday that it is excited to kick off a year of civic engagement in the Sikh American community. “This work starts with the announcement of our partnership with the U.S. Census Bureau, including our census one-pager in English and Punjabi and a new community FAQ on our upcoming work.,” it said.

The Sikh Coalition is recruiting and training volunteers to help community members submit their census responses in their gurdwaras across the country this March. If you’re interested in helping, email

“Every 10 years, the U.S. government conducts a census, or national headcount, to determine where people live,” said Nikki Singh, Sikh Coalition Policy and Advocacy Manager. “In 2020, it is critical that Sikhs–regardless of location, age, or citizenship status–are counted, and we’re here to help by letting our community know that the census is simple, safe, and essential.”
The census is simple to fill out. In March, information about how to complete the census will be mailed to every household. The short questionnaire asks how many people live in your home and very basic information about each person who lives there. You can return your form by mail or respond via the phone or internet; we recommend submitting your responses online.

It is also important to also know that the census is safe for everyone. U.S. citizens, permanent residents, recent immigrants, and undocumented persons should all be counted in the census; immigration authorities, including Immigration and Customs Enforcement (ICE), do not have access to census data. Representatives of the Census Bureau also cannot ask for your social security number or about your political views, nor will they ever solicit fees or donations for their work. You can and should report suspicious interactions with people claiming to be from the Census Bureau–including anyone who asks about you or your family’s immigration status–to community@sikhcoalition.org.

Finally, the census is essential. Census data helps the government determine where to spend $600 billion worth of resources per year across the country, funding things like schools, hospitals, roads, and parks. Businesses also decide where to move and invest based on data from the census. Perhaps most importantly, the census also determines representation in our democracy, including how local legislative maps are drawn, how many members of Congress your state gets, and how many electoral college votes each state casts in presidential elections. In short, the more people who are counted, the greater the voice their community has in this democracy.

“The Sikh Coalition is partnering with the Census Bureau because Sikhs have traditionally been a ‘hard to count’ population in the United States,” said Satjeet Kaur, Sikh Coalition Executive Director. “Our community matters, and we want to make sure that Sikh families are appropriately counted and accurately resourced wherever they are across our country.”

In addition to training volunteers to help Sikhs respond to the census, you can also email community@sikhcoalition.org if you speak Punjabi and are interested in employment opportunities with the Census Bureau–or to tell the Sikh Coalition if you are already volunteering or working for the Bureau. Finally, you can read the Sikh Coalition’s census one-pager, in English and Punjabi, the community FAQ on this work, and much more on their website.