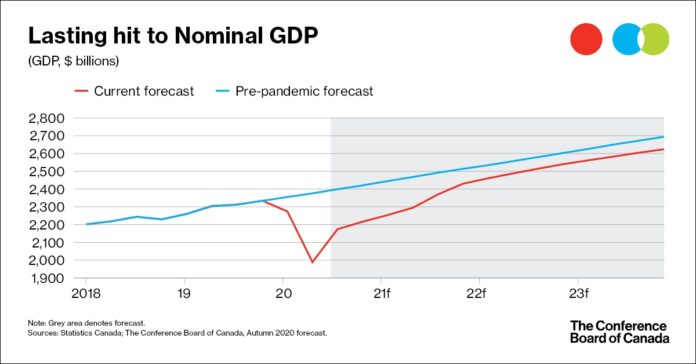 THE Conference Board of Canada’s Chief Economist Pedro Antunes, commenting on Monday’s federal fiscal update, said: “[Finance] Minister [Chrystia] Freeland has highlighted the importance of rolling out a vaccine and providing additional support to households and businesses through what will be a tough winter for many Canadians. The additional spending coupled with a lasting negative hit to government revenues will add copiously to the federal debt—boosting the net debt-to-GDP ratio from 35 per cent pre-COVID to around 54 per cent over the medium term. If debt financing costs remain low, the federal government can manage but there’s no doubt that the COVID-19 crisis will constrain federal finances for decades to come.”

Pandemic will leave lasting impact on government finances: Conference Board of Canada

Trudeau’s Liberals make it easier for the ultra-rich, instead of Canadian families: Federal NDP