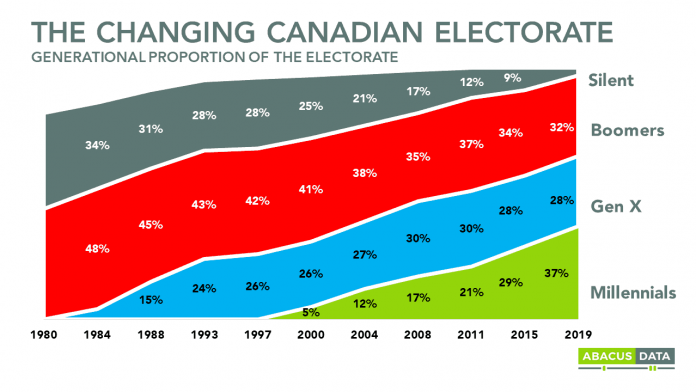 AS the Conservative Party is set to announce its second leader in the party’s short history (since merging the PC Party and Canadian Alliance), a lot of the debate within the party and among commentators has been about how the party needs to engage with and appeal to Millennial voters.

I crunched some numbers using data we’ve collected, historical data from the Canadian Election Studies going back to 2004, and turnout estimates from Elections Canada.

Here’s the bottom line as I see it.

#1: Millennials will be the largest age cohort in the 2019 election. It’s the first time in over 40 years that Baby Boomers will not make up the largest group in the electorate.

#2: While they are less likely to vote, turnout among Millennials is growing. You can’t count on them staying home in 2019. That’s a risky proposition. Even if their turnout rate remains lower, the size of the group means the number of voters will increase again in 2019.

#3: The Conservatives have been competitive among Millennials for most of the time they could vote. But in 2015, the Conservatives fell to third among this group. Note sample sizes for 2004/2006 are quite small.

#4: The Conservatives and Liberals won about the same share of the vote among Baby Boomers in 2015. And through the years the Tories won, they counted on Boomer support for victory. There, Millennials were fundamental to the Liberal win and the Conservative defeat (reminder: PM Trudeau is also Minister of Youth).

For me, the Conservatives and the party’s next leader has two choices.

Without changing and adapting to the shifting market it’s competing in, 2019 will feel a lot like 2015 and the road back to power will be bumpy. It’s basic market orientation. Something the Harper Conservatives in 2006 recognized. It’s time to recognize it again.