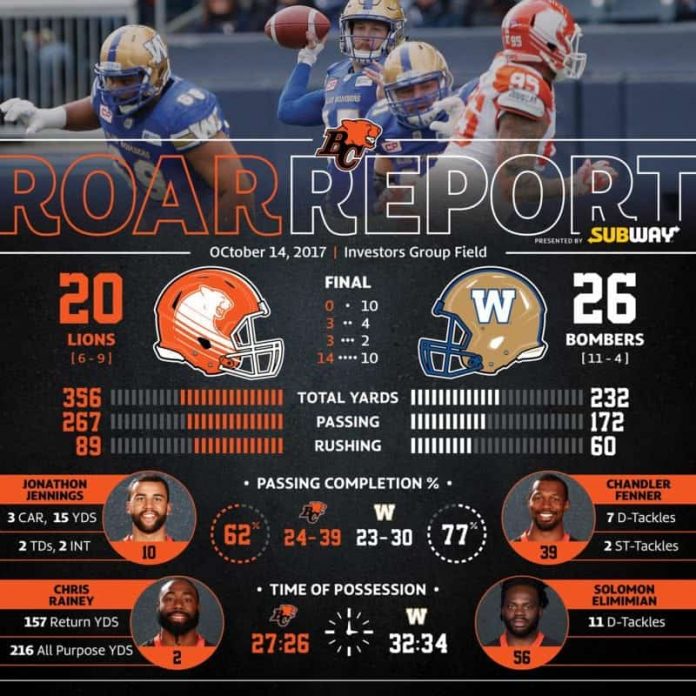 WINNIPEG Not enough intensity: that was  a common theme amongst members of the BC Lions (6-9-0) after a 26-20 loss to the Winnipeg Blue Bombers (11-4-0) on Saturday afternoon.
Kevin Fogg returned a 1st quarter punt 88 yards for a touchdown and the only other Bombers major came on a TJ Heath interception return in the 4th quarter to pretty much put it out of reach. Jonathon Jennings found Bryan Burnham for two majors in the final minutes to make it close, but the end result was a fourth consecutive loss.
“This isn’t the BC Lions. I don’t know what team this is right now. It’s not the BC Lions,” said an intense Burnham after the loss.
“We’re used to winning. When you keep getting loss after loss, you start to question what is really going on. We’re going to be on this plane for frickin three hours thinking about it. Hopefully by next Saturday we have an answer.”
That home tilt with the Edmonton Eskimos could be the final nail in the coffin. One more win by the Saskatchewan Roughriders would also assure the Lions of missing the playoffs for the first time since 1996.
Solomon Elimimian and the defence held Bombers QB Matt Nichols to just 172 yards and Andrew Harris only managed 52 yards on the ground. The 2014 CFL Most Outstanding Player says there is no moral victory after not allowing the Bombers offence to score a major.
“At the end of the day we didn’t win and that’s on us as a team,” said Elimimian.
“It’s not offence, it’s not special teams, it’s a team. At this point, with our record, that’s a hard pill to swallow.”
Elimimian once again led all Lion defenders with 11 tackles and played a big role in limiting Nichols’ production. At the end of the day, it was an all too familiar picture for this team: not consistent enough in all three facets. Although they may very well come up short, Elimimian insists they won’t mail it in.
“This is a proud organization. Like I said, individually guys have to look at themselves and see how can I individually help this team get the W because losing unacceptable and this feeling right here sucks.”
The Fogg special teams touchdown was by far the difference in a first half where both offences struggled to find any real momentum. The visitors cut their deficit to eight in the third quarter and trailed 16-6 when the Heath pick six gave them some much needed breathing room before the late rally by Burnham and company.
“It has kind of been the story of our season; waiting until it is desperation time to start making plays. All I can say is we have three more games and we gotta go to work,” added Burnham.
“There is just not enough intensity and not enough ‘want to.’ We’re kind of going throw the motions a little bit, thinking that it is just going to fall into place. JJ is not perfect, I am not perfect, Manny is not perfect and Jeremiah is not perfect. Sometimes we have to go out there, help each other and make plays for each other. That just didn’t happen tonight, not until late. It’s back to the drawing board and get ready for Edmonton.”

6– the number of consecutive Lions offensive drives that ended in punts to start this one. Ty Long’s 35-yard field goal on the last play before half was the first time they weren’t forced to kick.

64– the highest number of yards for any receiver on both sides. Emmanuel Arceneaux.

3.2- average yards per carry by Harris against a stout Lions front.

60– total rushing yards for the Bombers.

97– penalty yards for the Lions on 11 infractions.

“You’re building for the future. And I hate to say that, but the future could be next week. It’s football. It’s a game of emotion. You step on the field and you’ve got to turn the juices on. When they played with urgency, it was totally different. That (sense of urgency) is not possible. Unless you feel it yourself. It’s game number 16 coming up? You’ve got to play with emotion, you’ve got to play with intensity.”- Wally Buono.

An important sequence that not many will talk about came in the second quarter: Jennings and the offence started to move the ball, but had back- to- back drives stall at the Blue Bombers’ 45-yard line. Buono elected to punt and play the field position game. The inability to extend those two drives could have been a big turning point, especially when you consider the Bombers kicked a field goal on one of them.
This loss could go down as one of the more mind boggling of 2017. Although Nichols was missing Weston Dressler and lost Darwin Adams early in the game, their offence wasn’t quite in sync like it has been for much of the season. It was shades of the two losses to Calgary where Bo Levi Mitchell didn’t have his best outings and the Lions couldn’t capitalize.
Jennings will take the blame for this result, but was also forced to run around and improvise thanks to defensive coordinator Richie Hall’s schemes for the Bombers. The Winnipeg defence played to their capabilities and when that happens it can be a tough go, no matter who is behind centre.
One of the most impressive things dating back to Buono’s return to the sidelines was their ability to play high- level football on the road. This marked a fifth consecutive loss away from home, the most recent victory coming on July 15th in Hamilton when Travis Lulay had to replace Jennings after their opening play from scrimmage.
Despite what has gone down lately, there is still plenty of pride in the room. The group will not give up and many will embrace the final three games as a chance to prove they still belong on the roster going forward.
Matt Baker: mbaker@bclions.com