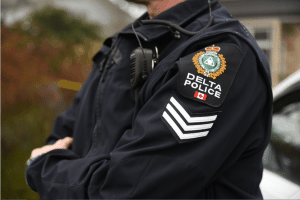 THE City of Delta has experienced another decrease in the Crime Severity Index (CSI) and continues to be low in comparison to the Metro Vancouver average. While the Canadian CSI increased slightly by one index point to 72, Delta continued on a downward trend hitting its lowest point since the index began, Delta Police said on Monday.

The overall CSI for Delta remained relatively constant between 2015 and 2016, but saw a decrease in 2017 related to a significant drop of 22.7 per cent in the Violent CSI. The Non-Violent CSI dropped by 1.6%.

“Delta continues to see a consistent reduction in the Crime Severity Index over the past decade. It speaks to our partnership with the community and the commitment of our officers. So far in 2018, crime appears to be levelling off and as our CSI declines to historic lows, continued reductions will become more difficult. However, we will continue to work towards making Delta one of the safest city in Canada,” said Cris Leykauf, Public Affairs Coordinator for the Delta Police Department. “Our focus is public engagement and visibility of the police, because that is what the public wants from us and that is reflected in the newly implemented 2018-2022 Community Safety Plan.”

In Delta, property crime, traffic issues and pedestrian safety are key concerns for citizens, and Delta Police said that they continue to develop strategies and work with stakeholders to respond to community expectations.

(The CSI is a measurement of crime that reflects the relative seriousness of individual offences. For example, ‘robbery’ is given more “weight” in the index as compared to ‘disturb the peace.’ Weights are calculated using conviction rates and sentencing lengths. A low CSI rate is indicative of a relatively safe community.)