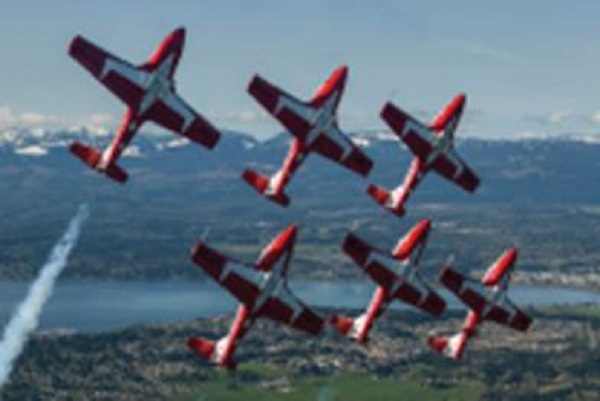 ROYAL Canadian Air Force aircraft will begin arriving into Delta from Moose Jaw, Saskatchewan, on Thursday, July 18. They will report to Boundary Bay Airport to begin preparations for the 2019 Boundary Bay Airshow.

The public is advised that the Snowbirds and CF-18 Hornet will conduct a number of low-flying flight demonstrations as low as 500 feet over Delta on practice day, Friday, July 19, and on airshow day, Saturday, July 20, with possible additional flights taking place on Sunday, Monday, and Tuesday (July 21-23).

During the Royal Canadian Air Force flight demonstrations, Delta residents and businesses can expect to see and hear the Snowbirds in a nine-aircraft formation, and a CF-18 Hornet as they soar through Delta’s skies. Residents can get a premier view of the aerobatic flight demonstrations and check out all the action first-hand by attending the 2019 Boundary Bay Airshow. Gates open at 11 a.m. The Boundary Bay Airshow is a family-friendly community event with free admission.

“Boundary Bay Airport played a significant role during World War II, training Royal Canadian Air Force student pilots for combat. The City of Delta is extremely proud of our aviation history and we are honoured to welcome the Canadian Armed Forces Snowbirds and CF-18 Hornet Demonstration Team to our community. You will likely hear the magnificent power of these aircraft before you see them – be sure to look up to the skies to catch a glimpse of the incredible skill and teamwork of our Canadian Armed Forces pilots,” said Delta Mayor George V. Harvie on Monday.

Low-flying aircraft flight demonstrations are scheduled to take place across Delta on the following days:

Learn more about the Boundary Bay Airshow at delta.ca/airshow and boundarybayairshow.com