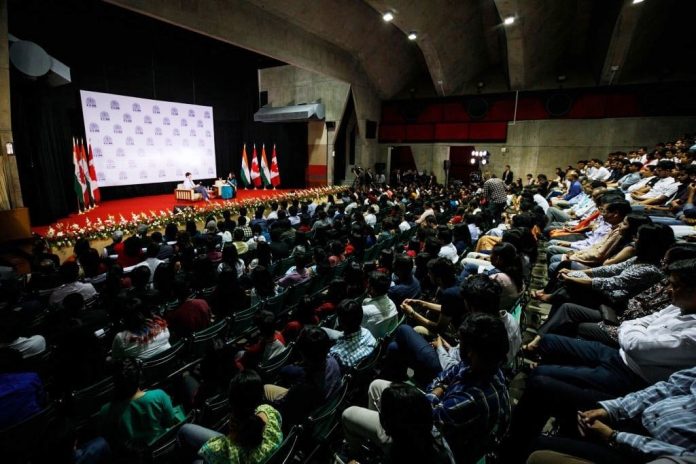 Ahmedabad (PTI): Canadian Prime Minister Justin Trudeau said on Monday heterogeneous society is the new reality of the 21st century and the biggest challenge is to understand how differences can become a source of strength, “something that India and Canada have done fairly well”.

Calling himself a “feminist”, Trudeau also said “we as a society are underperforming” as women are not being given an opportunity to contribute to their full potential.

He was addressing students at the prestigious Indian Institute of Management, Ahmedabad (IIM-A).

“The new reality of the 21st century is going to be more and more heterogeneous community and society, and the biggest challenge we are going to have as species is doing something that India and Canada have done fairly well–that is to understand how differences can become a source of strength,” he said.

Trudeau was responding to a question by a student during an interactive session. The student asked him as to how as a global leader he wished to take the world towards globalisation at a time when the global trend of nationalism was increasing.

He said many societies were struggling to come to terms with integrating all sections of people which was resulting in them turning “inward to nationalism and protectionism”.

Taking a variety of questions both from TV journalist Shereen Bhan as well as students, Trudeau defined himself as a feminist and emphasised the need to empower women to create a more successful society.

“I am a feminist. It is a word with certain connotation, loaded with meaning, but at the very root of it, it is very simple. If you think man and woman ought to be equal, and ought to have same opportunities, and if you recognise that there is still a lot of work to do to get there, you are also a feminist,” he said.

When asked to comment on dynastic politics, given that his father Pierre Trudeau also served as the 15th prime minister of Canada, he said getting into politics was “not an automatic choice” for him.

“I had a certain level of advantages. People knew the values I was raised with in deciding whether to vote for me or not. But citizens are not fools, they can tell whether someone is genuine in their approach or not, but are trying to live up to some lofty, familial expectation. For me, all my life I focused on how best I can make the difference,” he said.

On improving India-Canada bilateral trade ties, he said there is a “lot of room to grow,” and emphasised the need to strengthen people to people ties between the two countries.

“Right now, Canada-India trade is about 8 billion (dollars) a year, which is great. It is 2 billion in services. But we do 2 billion worth trade everyday with the USA, so there is a lot of room to grow,” he said, adding that discussion on trade of agriculture products, particularly pulses, was on between the two countries.

He said the greatest potential in trade between the two countries is in people-to-people connection. Trudeau said 125,000 Indian students joined Canadian universities every year. India, he said, is the number 2 source of students in Canada, but is going to be number 1.

Trudeau also talked about his government’s policy to open its borders to refugees, and said that his government was investing significant amounts in integration, language acquisition and health care for them, which is contributing to the country’s economy.

“Frankly, more countries need to do more in welcoming refugees, not because it is a right thing to do, but people who flee war and persecution, want better future for their children. They end up contributing tremendously for the country and society,” he said.

He said Mahatma Gandhi was an inspiration for him among Indian leaders.

TRUDEAU wrapped up his one-day visit to Gujarat with a meeting with Chief Minister Vijay Rupani at the city airport before his departure Monday evening.

Rupani invited Trudeau to the Vibrant Gujarat Global Summit, 2019, with his country’s delegation, as Canada is the partner country of the mega biennial event, it said.

Trudeau invited Rupani to visit Canada ahead of the Summit, said the release, adding that the CM accepted the invitation.

The two had detailed discussions about increasing cooperation in various sectors such as education, industries, start-ups and innovation, said the release.