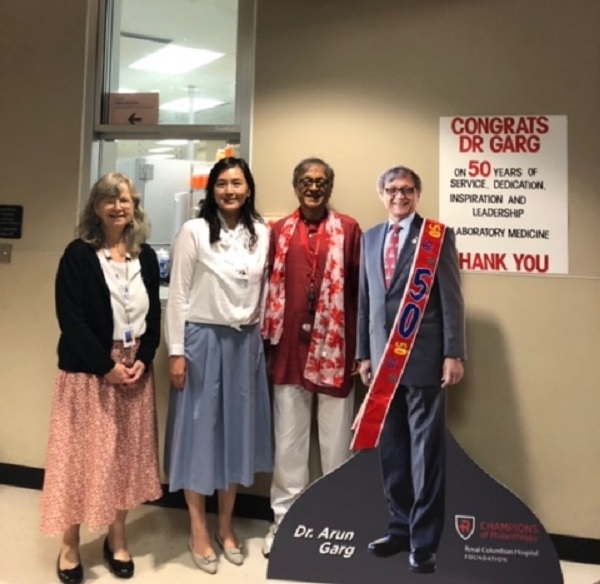 DR. Arun Kumar Garg received a wonderful, surprise celebration by the staff on Tuesday on his 50th anniversary at the Royal Columbian Hospital in New Westminster, which he said he found “very gratifying.”

Dr Garg is a global physician with interest and aspirations in integrated health and medicine.

He is Consultant Medical Biochemist at Fraser Health, Clinical Professor at the University of British Columbia, and a Clinical Service Adjunct Professor at Simon Fraser University.

He is founding Program Medical Director of South Asian Health Institute at Fraser Health. Garg conceptualized and founded the Canada India Network Society in 2010. To build economic, trade, educational and cultural links between Canada and India through healthy civil society. He is also Director of the Global Office in the Department of Pathology in the Faculty of Medicine at UBC.

Garg is founding member of Canadian Physicians with Interest in South Asia (PISA) of BC, and the Canadian Association of Physicians of Indian Origin (CAPIH). He is an executive member of Global Association of Physicians of Indian origin (GAPIO). He has served in many leadership positions including president of Doctors of British Columbia. He has been the recipient of many awards and honors, including an honorary doctorate of technology from the British Columbia Institute of Technology and Dr. Don Rix Gold Medal for Leadership of Doctors of British Columbia, Dr Cam Coady Service Award and the Dr. Dave Hardwick Lifetime Achievement Award.

Pedestrian crashes​​ nearly double at this time of year

ONTARIO: Dalwinder Singh sentenced in murder of his wife and mother-in-law

Half of Canadian kids witness ethnic, racial bullying at their school: New study

Pedestrian crashes​​ nearly double at this time of year

ONTARIO: Dalwinder Singh sentenced in murder of his wife and mother-in-law