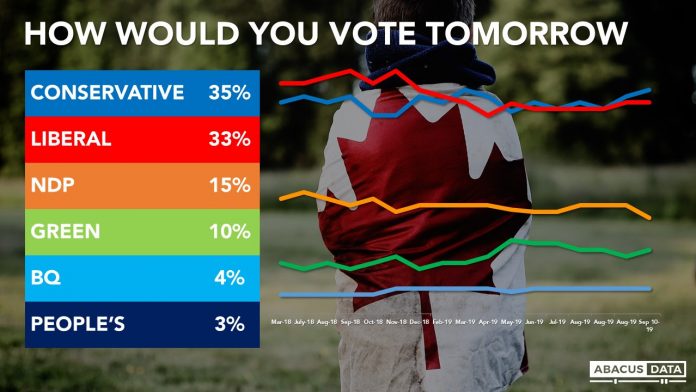 WE completed our latest national survey the day before the official election campaign began.

Here’s where things stand at the start of the campaign (all interviews were conducted before the campaign began):

If an election were held at the time of the survey, the Conservatives (35%) and Liberals (33%) would capture roughly the same amount of popular support, followed by the NDP at 15%, the Greens at 10%, and the BQ at 4% (17% in Quebec). Maxime Bernier’s People’s Party registers 3% support nationally.

The Liberals lead in the Atlantic provinces and Quebec, while the Conservatives are well ahead in the Prairies. Ontario and British Columbia are close in our latest survey.

Conservatives have a massive lead among voters who self identify as right of centre, including a 49-point lead among “centre-right” voters. Liberals have substantial leads among left of centre voters, but still split a significant proportion of that vote with the NDP and Green Party, and even with the Conservatives. Among centre-left voters, the Liberals have a 30-point lead over the NDP. Worth noting is that among self-described right-wingers, the People’s Party has only 4-5% of the vote.

Because affordability and cost of living issues have featured prominently in the issues that concern Canadians, it is also worth noting that among the 20% of Canadians who say that they can’t afford the things they need, voting intentions are pretty diffuse: 34% would vote Conservative tomorrow, 23% NDP, 19% Liberal and 15% Green.

THE POTENTIAL FOR VOTE SWITCHING

Across the country, 42% say it is very or somewhat likely that they will end up supporting a different party than the one they think they would vote for today. Quebecers are the most open to possibly switching (49%) while Albertans least so (32%).

The Conservative vote is most stable, with 33% of current Conservative voters saying them are very or somewhat likely to switch, compared to 43% among Liberal supporters. The Green and NDP voters are most vulnerable, with 56% of Green voters and 52% of NDP voters saying they might look elsewhere on election day. 42% of those who say they are left-wing might switch, compared to just 27% of those who say they are right-wing.

Conservative switchers would scatter 31% to the Liberals, 22% to the NDP, 21% to the Greens and 27% to other parties.

Liberal switchers would also scatter with 37% going to the NDP, 26% going Conservative, and 22% to the Greens.

Green Party switchers would go to the NDP (30%) and the Liberals (27%) followed by the Conservatives at 16%. Another quarter would choose another party, split mostly between the BQ and People’s Party.

Today, 35% would prefer to see Justin Trudeau remain Prime Minister, compared to 33% for Andrew Scheer, 15% for Elizabeth May, and 13% for Jagmeet Singh. Just 5% would like to see Max Bernier become Prime Minister.

Trudeau has a 28-point lead in Atlantic Canada on this question and a 16-point lead in Quebec. Scheer leads Trudeau by a wide margin in the Prairie provinces while the two are within 3 points of each other in Ontario and British Columbia.

IMPRESSION OF THE LEADERS

Among NDP voters he is -21, among Green Party voters his net favourable/unfavourable score is -34, and among Conservatives, he is -75.

Scheer has 35% positive and 38% negative opinion nationally both up marginally since the end of August. He is broadly liked on the right, disliked on the left. Among those on the centre his net score is -5, substantially better than for Mr. Trudeau (-16).

Jagmeet Singh is 30% positive and 28% negative, the first moment in some time that the NDP leader has been into net positive territory as his positives are up 4 since the end of August. He is +16 among Liberal voters, +2 among Green Party voters, but -33 among Conservatives and -20 among BQ voters.

May has the most favourable image among Canadians with 33% positive and 19% negative (+14). Among Liberal voters, her image is +17, -11 among Conservatives, +29 among NDP supporters, and +85 among Green supporters.

ECONOMY AND STATE OF COUNTRY

Despite this positive assessment of the country, more continue to believe the country is headed off on the wrong track than in the right direction.

According to Bruce Anderson: “Barring something quite unexpected, this is a race that will go to the Liberals or the Conservatives. Whether those two parties win from or lose votes to each other is the dynamic that could have the biggest impact on seat counts, but if they mostly hold their ground against each other, the outcome will be decided by how the NDP and Green Parties do at holding or increasing their support levels.

With just over half of Green/NDP votes indicating they could move around, that amounts to about 12% of the electorate. If the Liberals can pull some of this vote by raising fears of conservative social and environmental values, they will be in a good position to win. If they can’t, and if the Conservatives can shake loose some Liberal and BQ votes, the outcome could well be a Scheer government. If campaigns always matter – this one may matter even more than usual, given how close things are at the outset.”

According to David Coletto: “The 2019 election begins with a deadlocked national vote and a lot of uncertainty. Voters appear open to persuasion and not fully dialled into politics nor have seriously considered their choices.

A few things stand out to me from our first election poll.

Although we might assume that NDP or Green supporters would prefer Trudeau over Scheer as Prime Minister, our data suggests otherwise. If the election becomes polarized, we can’t assume that Trudeau would be the primary beneficiary of voters who switch their preferences away from the NDP or Greens. While more potential NDP or Green switchers would choose the Liberals over the Conservatives, many say they would go NDP or Green explaining the recent tussle between the NDP and Green Party.

While the NDP has struggled to nominate candidates and will have less money to campaign this time, early signals point to some positive movement for Mr. Singh. For the first time in a while, more view him positively than negatively. This hasn’t translated into more support yet, but it’s some good news for a party that hasn’t had very much over the past few months.

Right now, polling is telling us what voters’ first impressions are. Many haven’t considered their choices or know the leaders all that well. The campaign can either confirm or change them but would be wrong to consider them static. Either way, the electorate is in a more defensive posture than in 2015, despite feeling relatively good about the economy. They don’t seem that excited about their choices and many are likely looking for cues about where the election is going. My sense is that this election begins in uncertain waters and where things end up is quite difficult to predict.”